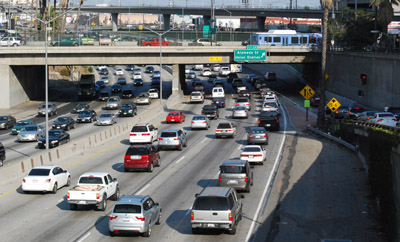 HOLLYWOOD—A total of 11 cars were involved in a pile-up on the Southbound 101 Freeway near Cahuenga Boulevard on Sunday, July 25, at 2:09 a.m. The accident left four people injured, and the southbound freeway had to be closed all the way to the 170 Freeway until 3:30 a.m to accommodate investigators.

According to a California Highway Patrol press release, a Los Angeles Division unit of the CHP came upon the accident early Sunday in which six separate collisions occurred, involving a total of 11 vehicles. Preliminary investigations show that a 20-year-old driver of a black Acura was cut off by an unknown vehicle, causing the Acura driver to brake to avoid an accident. Consequently, the driver of the Acura was sideswiped by a 22-year-old Marina Del Rey resident driving a red Jeep, who proceeded to push the Acura into a black Ford, which was driven by a 28-year-old Glendale resident. All of the vehicles then came to a stop, blocking traffic and resulting in several smaller accidents with other vehicles on the freeway. “It just turned into a pile-up from there,” said a CHP official.

Four people were taken to the hospital with minor injuries, according to the Los Angeles Fire Department. The CHP could confirm that one victim suffered a broken leg, but no injuries were life-threatening.