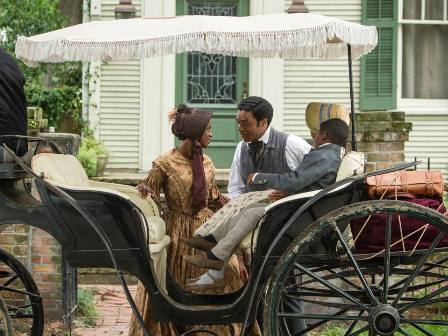 HOLLYWOOD—With the Academy Awards less than one week away, another major awards show took place on Saturday, February 22, as the 45th Annual National Association of Advancement for of Colored People (NAACP) Image Awards. The big winner of the night was the picture “12 Years a Slave” which took home two trophies including Outstanding Motion Picture.

Hosting the ceremony was funnyman Anthony Anderson, with tributes to some of the finest work for minorities in music, television and film. He took a few sots at some major celebrities including Paula Deen, Justin Bieber and Miley Cyrus. A few twerking jokes, as well as off-beat humor to say the least, he even took a few jabs at British actors Lupita Nyong’o, Idris Elba and Naomie Harris.

On the television side of things, Actress in a Drama Series went to Kerry Washington for “Scandal.” The very pregnant actress was ecstatic with her win. “Scandal” took home the prize for Outstanding Drama Series, which wasn’t a huge surprise in my opinion. Outstanding Talk Series went to comedian Steve Harvey who was unable to attend the ceremony.

Oscar-winner Forest Whitaker was honored with the Chairman’s Award for his charitable and humanitarian work in the community. A moving tribute to world leader Nelson Mandela was led by TV titan Oprah Winfrey who reflected on her past with Mandela when she was invited to his home. Some extremely inspirational and powerful words from Ms. Winfrey as she described the global leader; those words later translated into a musical performance by music legend Stevie Wonder.

Outstanding Comedy Series went to “Real Husbands of Hollywood.” Comedian and star Kevin Hart accepted the award on behalf of the entire cast and crew.  Hart was also a double winner in the evening taking home awards for Entertainer of the Year and Actor in a Comedy Series for his work on “Real Husbands of Hollywood.”  The comedian’s speech while accepting his award for Entertainer of the Year, was heartfelt and truly honest from one ofHollywood’s funniest comedians.