UNITED STATES—Video footage of a November 21 school bus incident has surfaced of  a 14-year-old student in Hamilton County, Florida who was beaten by other teens on the school bus.

American Diaries posted the attack on Twitter, showing several students physically attacking the victim, who was believed to be wearing a Make America Great Again hat.

I am representing the victim in this video who is a student at Hamilton County, FL School District. This incident occurred on the school bus and is under investigation.https://t.co/POTpm4vu9K

The Hamilton County Sheriff’s Office indicated a Tweet saying there was no evidence of the attack as a result of being caused by the student wearing certain apparel.

“Boy Viciously attacked on school bus for wearing a #MAGA hat.  Regardless of your political affiliation, this is not okay!!!  This is only one disturbing incident out of countless,” tweeted @MrsNewell888.

Caroline Orr, who is a self-proclaimed feminist tweeted Trump supporters made up the story.

“Guys, I know that Trump supporters don’t care about the truth behind the incident on the school bus. That’s not the issue though.  They’re trying to shame the media for not covering something that didn’t actually happen,”  Orr tweeted.

The victim reportedly wore a Make America Great Again hat weeks prior and has been bullied as a result. The attack on the school bus led to the victim being transported to a local hospital to be treated for injuries sustained.

“To be clear my son bought the #Trump2020 with his own money at a flea market a few weeks ago.  He was proud to wear it.  He wore it to school, but due to immediate bullying, he put it away and didn’t wear it to school again, sadly the damage was already done & was now a target.”

The victim’s mother added her son had mile poured over his head and she added:

“From that point on, he was steadily getting messed with. He was getting tripped, hit, and verbally abused on the bus, but it all came to head yesterday on his bus ride home.  The nurse noted there are bruises on his arm that were older along with his new injuries.  He didn’t tell us.”

The attorney representing the victim, Foye B. Walker clarified that the incident occurred a GoFundMe page for medical costs for the child has been setup to cover costs. 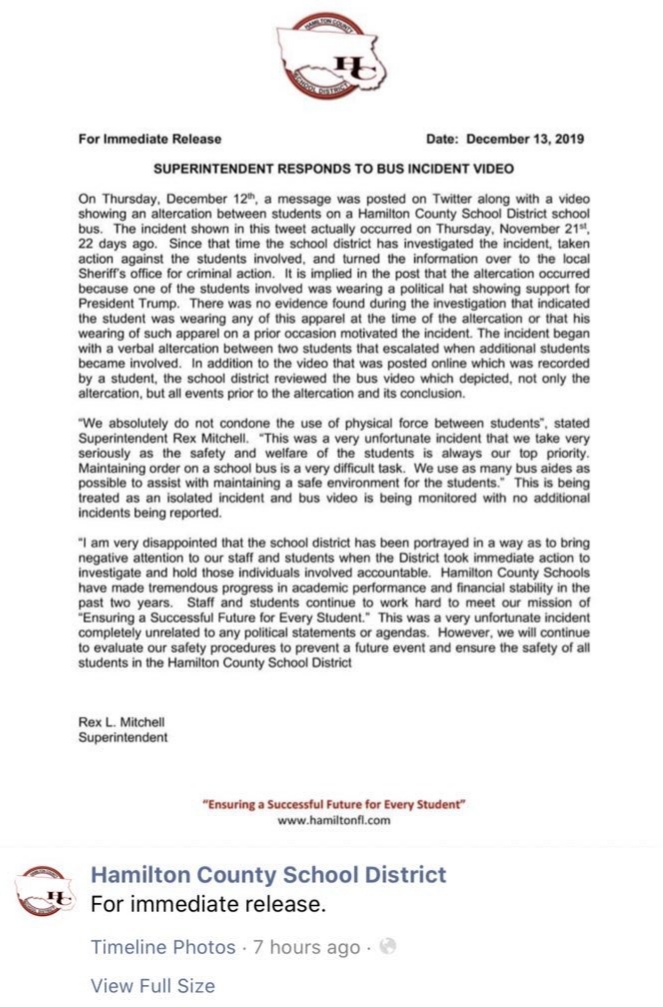 The Bellwether Closes Its Doors

Toxicity In Politics In America