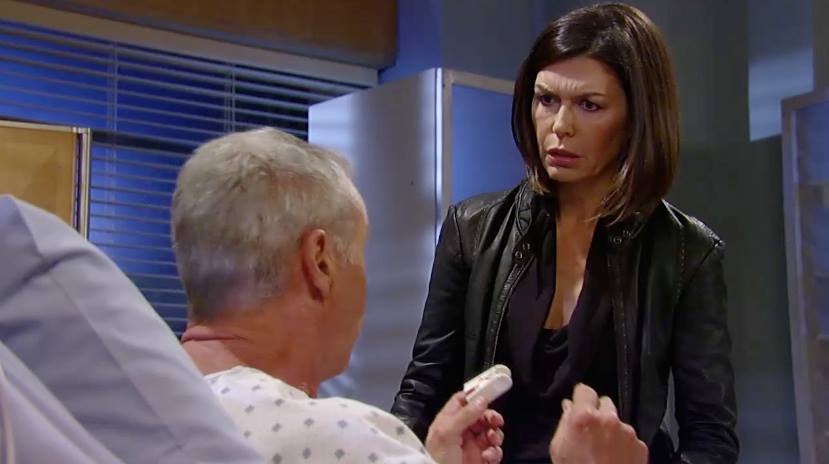 HOLLYWOOD—Time for another update to all the soap fans of “General Hospital.” We only have about a week left of the notorious November sweeps and this is the time that missing an episode that can put fans in a tizzy. The big question fans have been eagerly anticipating since discovering that Robin (Kimberly McCullough) was alive, is just when she will be reunited with her family?  Well it’s been well over two years and the wait looks to be finally over.

Robin who has been masquerading around Port Charles keeping her identity a secret from her loved ones to protect her parents Anna (Finola Hughes) and Robert (Tristan Rogers) from the ruthless Jerry Jacks.  This week, the super spy parents got one up on Jerry and are headed back to PC to reunite with their daughter.  There happens to be one big problem, Cesar Faison (Anders Dove) is on the loose.  He’s turned his back on Dr. Obrecht, ensuring that her and Duke (Ian Buchanan) spend the rest of their time locked in captivity.

This cannot bode good news for any of the residents of Port Charles. Something bad is about to happen and lives will be at risk.  Luke (Anthony Geary) has been in happy spirits ever since being cured, but has been haunted by not knowing the name of the doctor that rescued him. Determined to get answers he stormed in Wyndemere to come face-to-face with Robin! To say he was at a lost for words would be an understatement; so he made the decision to force Nikolas, Britt and Robin to not be held captive and to fight to end this chaos.

Patrick (Jason Thompson) and Sabrina (Teresa Castillo) are eagerly planning a last minute wedding, but it looks like Robin will crash the wedding ruining not only Sabrina’s big day, but also certain to send Patrick in a time warp.  I can’t help, but say I feel sorry for Sabrina, but that means good news for Carlos who has been vying to get his ex back for weeks now.  We can only imagine what a scorned lover might do.  If the audience thought Lisa Niles was bad, we might see a side of Sabrina that is hellish to say the least. By the way her cousin, Juan Santiago (Michael Saucedo) is headed back to the canvas.  That means big trouble will be brewing real soon.

While Robin’s rescue is generating massive suspense, the custody battle for baby Connie has been revealed: Spinelli (Bradford Anderson) gets sole custody! That’s right Lulu (Emme Rylan) and Dante (Dominic Zamporgna) has had their hearts ripped out, and Maxie (Kristen Storms) is paying for her duplicity by being barred from seeing her child for six months. I must say the friendship between Lulu and Maxie looks over, but ripple effects are still in the mix.

Now that everyone knows Derek Wells (William deVry) is really Julian Jerome, an epic mob war is sure to storm through PC in the coming months. Sonny (Maurice Benard) is out for blood and the Jerome clan wants to reclaim the territory that is rightfully theirs.  There is just one problem: their kids are getting caught up in the chaos to say the least. Morgan (Bryan Craig) has betrayed his father Sonny and has decided to work with the enemy, placing him in dangerous spot.  He has virtually alienated himself from his entire family; and his only allies are Julian and Ava (Maura West).  I must admit Ava might be his only protection at this point, as Sonny is out for blood.

After weeks of being on the backburner, the trial is in full-effect for A.J. Quartermaine for the murder of Connie Falconeri.  Its way to obvious for him to be the killer, so we’ll find out in the coming weeks just who pulled the trigger killing Sonny’s loved one.  I have a feeling it might be a member of the Jerome clan responsible for the dearly departed, but in the soap arena, things are never as clear as the light presents them to be.

So “GH” fans are you expecting in shocking reveals before the end of November sweeps?  Share your thoughts on our Facebook page. “GeneralHospital” airs weekdays at 2 p.m. on ABC.