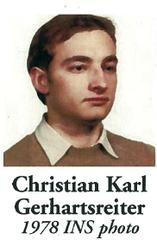 LOS ANGELES—Prosecutors believe they have finally put one of the last pieces of a long tumultuous puzzle into place, getting them one step closer to solving the 1985 San Marino, California cold case murder.

As authorities conducted their investigation into the sudden disappearance of John and his wife, Linda, they found that Christopher Chichester, one of Gerhartsreiter’s many aliases and a tenant in the family guest house at the time, had also disappeared.

When questioned, friends and co-workers told authorities that Chichesterclaimed the couple went on a honeymoon in Paris and from there would be doing work for the government on the East Coast.  He also claimed that he had plumbing problems fixed when neighbors inquired about the fresh dirt in the backyard of the home.

In 1989, authorities received a new lead on Chichester’s whereabouts when he tried to sell a car in New Hampshire that was registered to John Sohus. Local Authorities received a tip from the apprehensive buyer but by the time they had arrived to interview Chichester, he had once again eluded the law and disappeared.

It wasn’t until nine years after the disappearance of the couple that investigators would get a break in the case.

In 1994, swimming pool excavators found skeletal remains of an adult male in the backyard of the Sohus’ former home.  The remains were later identified as John Sohus.  His wife Linda is still missing and any remains have yet to be located.

Gerhartsreiter was considered a suspect in the case but authorities were unable to locate him and the case went into the cold file.

Gerhartsreiter had moved to New York and took on the most notable alias of Clark Rockefeller.  He managed to work his way up within the elite social circle.

Rockefeller had convinced Boss that he would stay home and take care of their daughter while she would work.  Boss found that Rockefeller was not who he said he was and, after a 12 year union, filed for divorce.

In 2008, Rockefeller abducted his daughter and led authorities on a manhunt along the East Coast.  He was caught in Baltimore and is currently serving a four to five year prison sentence for abducting his 7 year old daughter and assaulting her body guard.

It was during the high profile case that detectives reopened their investigation into the murder of John Sohus and found evidence from the crime scene linking Rockefeller to the 1985 murder.

Authorities have filed papers and are awaiting his extradition to Los Angeles,California.