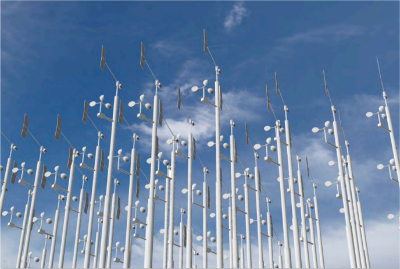 SANTA MONICA—On Tuesday, January 24, the Santa Monica City Council voted unanimously to pay $440,200 for artwork that will be installed in the new Palisades Garden Walk, the construction of which is estimated to be completed in late 2013.

IÃ±igo Manglano-Ovalle, a Chicago-based artist, was chosen to create a unique sculpture comprised of 49 telescoping stainless steel poles on top complete with anemometers and wind vanes. Once complete, the sculpture will be installed at the park, where it will be viewable from many vantage points. Up to $2,000 has been funded for its annual maintenance.

The city chose Manglano-Ovalle’s design out of 14 others submitted by renowned artists from around the world because of the potential of its “elegant, grid-like form and quiet kinetic aspect” to highlight the park’s topography and local environment. His previous work collaborating with scientists on projects to create objects that are difficult to touch in the natural world such as DNA molecules and clouds was another reason he was chosen by the Cultural Affairs Division’s selection panel.

Manglano-Ovalle’s work is held in collections that are featured at the Solomon R. Guggenheim Museum and at the Whitney Museum of American Art, both in New York City. He has received fellowships from the United States Artists, the John D. and Catherine T. MacArthur Foundation and the National Endowment for the Arts.

Real Money Gambling: 5 Things You Have To Know

“Walking Dead” Recap: ‘Out Of The Ashes’