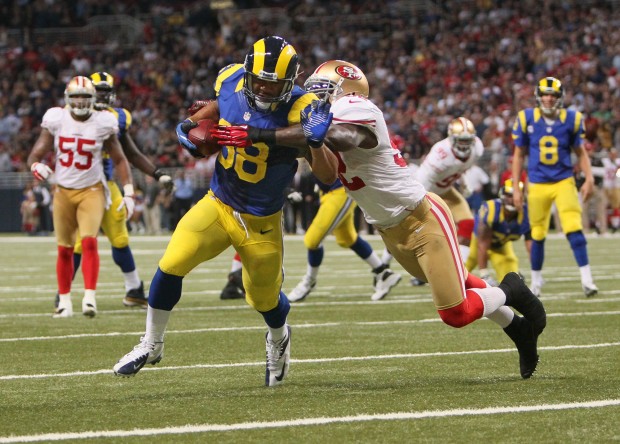 SANTA CLARA—The San Francisco 49ers had a week off which should have given them the ammunition to regroup after being pounded by the Denver Broncos, but the rest did not help the team. The 49ers fell 13-10 to the St. Louis Rams on Sunday.

Let’s face it the Rams haven’t played the best football so far this season, and many expected SF to rise to the occasion to add a win to the season. Now sitting 4-4 the team will have to make some major improvements if they are hoping to be considered for playoff contention come December.

The game was a virtual dead heat for both teams for the first three quarters. Both teams added points in the first quarter with a field goal, and then added a touchdown in the second quarter to end the first half in a tie, 10-10.

The third quarter proved to be a lesson in good defense as both teams held their opponent scoreless. With only 15 minutes left to play in the game, not only did St. Louis put stops on the 49ers when they needed to, they were able to get their defense going to the point where they garnered a field goal giving them the game.

Sunday’s game between the 49ers and the New Orleans Saints should be an interesting one. With both teams sitting 4-4, one will be looking to break that record. SF should watch out as they will find themselves have to travel on the road to get the win.