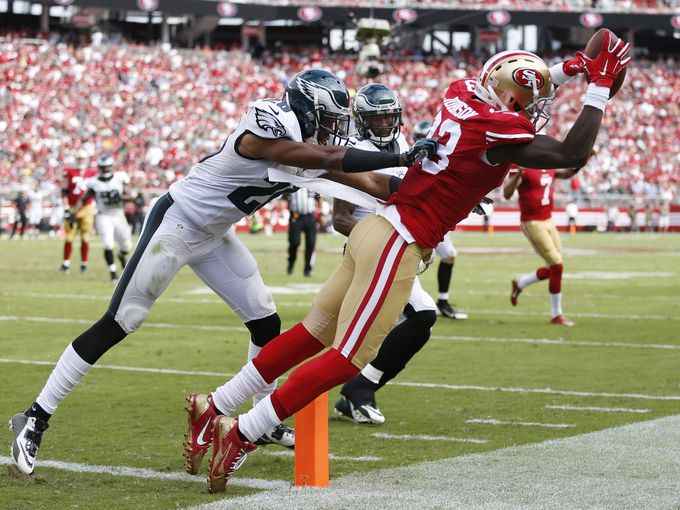 SAN FRANCISCO—The San Francisco 49ers were determined to bounce back from back to back losses as they battled the Philadelphia Eagles who came into the game undefeated. Well that perfect record was tarnished thanks to the 49ers edging out a win 26-21.

The Eagles proved to a be a force to reckon with scoring a touchdown in the first quarter giving them a 7-3 lead over their opponents only managed a field goal. Thing would move a bit in the 49ers direction as they earned a touchdown and field goal to limit the Eagles lead to only 8 points by half-time.

The team must have had a great discussion on defense in the locker room, because the 49ers came out blazing in the second half preventing the Eagles from putting any more points on the board. They added another touchdown and field goal to place them in control of the game 23-21.  The Eagles were determined to get the offense going into the fourth quarter, but SF edged out a field goal adding onto their lead by three more points.

The team improved vastly in the number of turnovers against the Eagles limiting themselves to just one. The Eagles on the other hand didn’t fair so well with 4 turnovers. SF Quarterback Colin Kaepernick completed 17 of 30 passes for a total of 218 years and threw 2 TD’s. Kaepernick did allow one interception during the game.  Frank Gore proved to be a beast for the 49ers rushing for 11 yards and 21 carries, not to mention a touchdown as well.

San Francisco will face-off against the Kansas City Chiefs on October 5.