UNITED STATES—Six Individuals were arrested and detained in connection with the shooting at the Naval Air Station (NAS) in Pensacola, Florida on Friday, December 6. Mohammad Saeed a–Shamrani, 21, entered a classroom at the NAS facility and shot and killed three sailors, and injured several others, one day before the anniversary of Pearl Harbor. 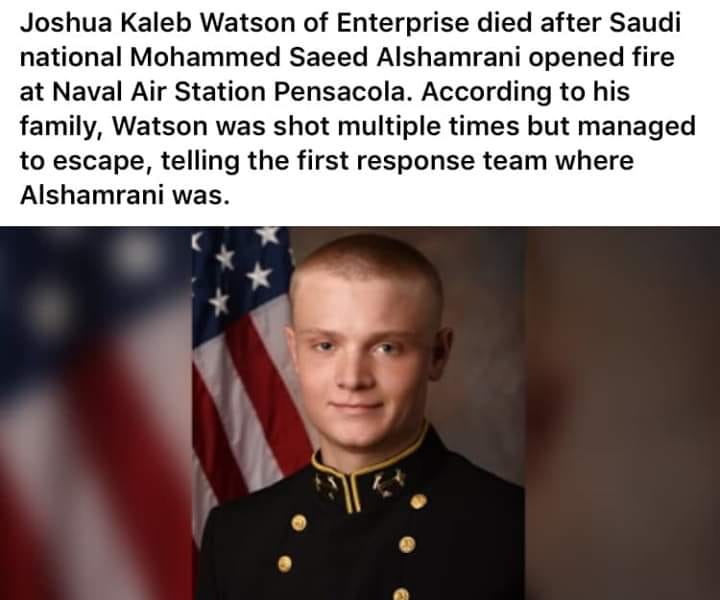 Alshanrani was a 2nd Lt. in the Saudi Arabia Airforce and a Naval Flight Officer at the U.S Naval Aviation School Command. Of the six detainees, three allegedly filmed the incident.

I'm very concerned that the shooter in Pensacola was a foreign national training on a US base.

Today, I’m calling for a full review of the US military programs to train foreign nationals on American soil. We shouldn't be providing military training to people who wish us harm. pic.twitter.com/JkypdikYI9

What hurts the most for our community is that these brave and patriotic Northwest Floridians were killed while trying to help others develop the capabilities to protect their own countries. pic.twitter.com/JmqHiAeqdb

“Today was a sad day for Naval Air Station Pensacola and the local community with the events that unfolded onboard the installation,” said NAS Commanding Officer Capt. Tim Kinsella in a statement. “We appreciate the support that we have received from across the country to include local, state and federal agencies. The quick actions by our naval security forces and local law enforcement prevented the situation from potentially being worse than it was. NAS Pensacola stands strong with our Navy family and our Pensacola community. Our hearts and prayers go out to all of the victims and their families.”

“This has been a devastating week for our Navy family. Our hearts break for those who lost their lives in Pensacola and the wrenching pain it causes their loved ones. When tragedy hits, as it did today, and Wednesday in Pearl Harbor, it is felt by all. Those who grieve do not do so alone. We grieve together alongside you. We serve together as one team, as one Fleet, as part of one Joint Force. As shipmates – uniform and civilian, active and reserve – we must come together to be the strength and support for those who need us now. No one should feel alone. There are many resources available for us all – including counselors, chaplains, and mental health professionals. We must look out for each other and take care of one another. That extra effort to extend a hand or lend an ear to those who need help should never be underestimated. It will make a difference,” said Chief of Naval Operations Adm. Mike Gilday in a statement.