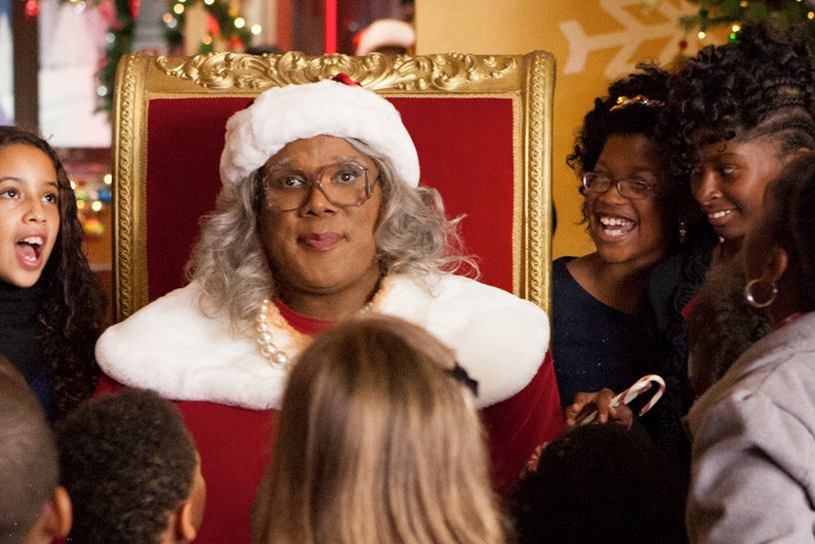 HOLLYWOOD—Tyler Perry has brought alter ego Mabel ‘Madea’ Simmons back and this time thrown a bit of a twist in the hilarity. “Tyler Perry’s: A Madea Christmas” sees the gun-totting old lady giving a dose of reality to her niece, Eileen (Anna Maria Horsford), her great-niece Lacey (Tika Sumpter) and group of unsuspecting citizens when she takes a surprise trip in the country during the Christmas holiday.

Before the trip to Alabama, gets going, the audience is given a glimpse of Madea (Perry) working at a department store. She dishes out quite a few hilarious moments as she encounters a wide array of rambunctious children. When she discovers from Eileen, that Lacey won’t be coming home for Christmas, they decide on an impromptu road trip where a few bombshells are delivered, notably that Lacey is married to Connor (Eric Lively) who happens to be a farmer, and he is white. This doesn’t resonate well with Lacey’ mom, who isn’t too tolerate. Cue the hi-jinks!

Lacey’s attempt to keep the charade that he’s a farmhand, and not her lover, doesn’t bode to well with Madea and Eileen who suspect much more to the story, as his parents Larry the Cable Guy and Kathy Najimy arrive. This is a deviation from Perry’s previous comedies as he introduces the audience into a hillbilly aspect of humor. Sumpter, Lively and Horsford, deliver solid work, but the stars of the picture are indeed Perry, Najimy and the Cable Guy himself.

The actor, writer, producer, director has received constant flack of his films universally appealing only to a African-American audience, but digging a bit deeper, there is a universal message that appeals to all cultures. This film examines the notion of tolerance.  We might not all look the same, act the same or think the same, but we’re all human beings; and in the case of love its colorblind.

The element of red-neck humor as some would call it, creates a bit of clash with the hilarious hi-jinks audiences have come to expect from Mabel Simmons. She has a bit of competition from Larry the Cable Guy and Najimy who produce just as many laughs as their counterpart, as they get to know each other over the holiday weekend.

Throw in a few pop culture references from the past, with a dose of kooky characters and you have a fun ride. “Tyler Perry’s: A Madea Christmas” is not Perry’s funniest comedy, I still hold that award to “Diary of a Mad Black Woman,” which was quite dramatic, but hilarious at the same time.