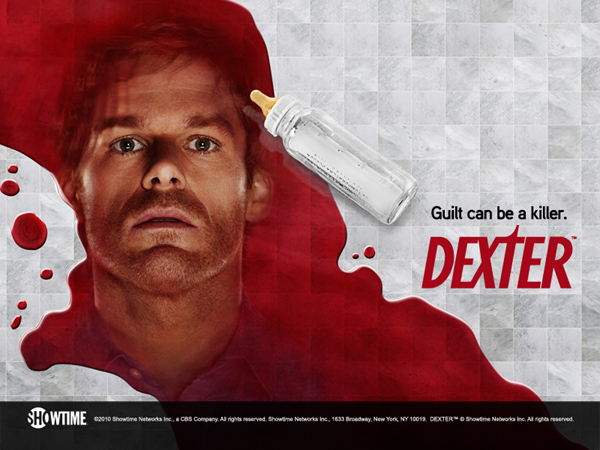 HOLLYWOOD—Still reeling from the death of his wife Rita, and becoming suspicious to the FBI and to a co-worker Quinn, Dexter’s life took a decidedly downward turn tonight on the episode titled “Hello Bandit.” Michael C. Hall’s amazing performance leaves very little to the imagination. His rage and pain are visible and viewers feel like they are in the home of Dexter and his family when his rage is being shown. Hall has a unique ability as an actor to put himself in viewers’ faces and we feel every emotion of the character, including emotions we don’t like to admit we empathize with. Being inside the brain of a serial killer has to be chilling and very eventful. Between the great writing and acting on this series the emotional roller coaster ride for viewers is exciting, exhilarating and horrifying. With a definite promise that more is yet to come later in this season.

On Sunday night, in his new role as single father, an anxious Dexter desperately tried to get his family’s routine back on track, and to begin the process of moving on from Rita’s tragic and untimely death. Dexter also attempted to focus all his attention on the kids while curbing his dark urges. It was hard, it seemed almost impossible for Dexter to achieve his wishes. Rita was the one person who kept Dexter from devolving into a complete madman. Without her, who knows where the pain will take him? Viewers are dying to see the further descent into madness and the dark corners of Dexter’s mind.

Just when Dexter was trying to get himself pulled together, evidence of foul play fell into his lap. He then made a horrific discovery, setting him on the trail of his next victim. It was frightening and exciting to see Dexter on the hunt again. Michael C. Hall manages to show no signs of exhaustion in playing one of the toughest roles in television history.

Debra, trying to be the good sister, shared her apartment with Dexter and the kids only to find there was now no room for her. Quinn did his part to try to help Debra with her ordeal and grief, but could not stop being inquisitive when it came to her brother’s erratic behavior. Quinn’s curiosity is something that may end up being his downfall. Dexter’s inability to grieve as a normal or sane person is placing him on the radar of a number of officials within law enforcement, including his own bosses. After all, the spouse is always the first major suspect when a married person is found dead.

Miami Metro found their work cut out for them, when a grisly scene was found in a Venezuelan neighborhood. It seems that yet another Florida serial killer is on the loose.
Showtime and “Dexter’s” writers have done a spectacular job not only making sure we all care about what Dexter Morgan’s next move is, but to also incorporate a whole new set of murder mysteries that are being launched on the second episode of season five. This ensures that we are engrossed in this series yet again. Sherman Oaks reader Wendy Fujimori tells Canyon News, “I am a huge Michael C. Hall fan. He’s such a great actor in everything he does. I loved him on HBO’s ”˜Six Feet Under.’”

When Dexter’s stepchildren Cody and Astor decided to leave him and go live with their grandparents in Orlando, tears streamed down my face, even though the cold-stone emotions on Dexter’s face seemed poignant and expected. Cody’s final words to Dexter, “I don’t want to leave you,” will haunt the serial killer forever. Quinn’s investigation into the real identity of the phantom killer Kyle Butler will lead to disaster. Dexpert Colleen M. Jackson Kobrynich said, “I don’t want to see Quinn get hurt, but I don’t want Dexter outed just yet.[Sic]”

“Dexter” has started out on a great note so far this season. Last season “Dexter” murdered the competition on the other networks and set a very high bar for all dramas on TV to achieve. Between the superb writing so far this season, an unforgettable acting performance by the sublime Michael C. Hall, which may land him yet another Emmy and Golden Globe-nomination and the familiarity the writers maintain between their major and secondary characters on this hit series with the viewers, “Dexter” is truly Sunday night’s biggest and boldest hit show. This show has made no mistakes thus far, and the only mistake is if TV viewers don’t watch it!