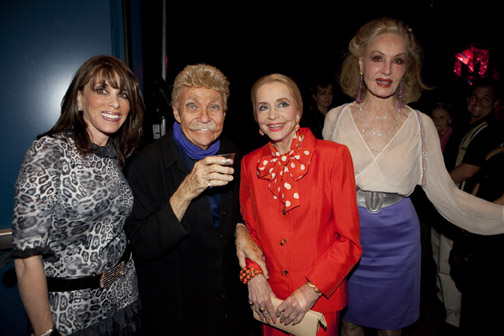 The Comedy Legend of Stage and Screen, Rip Taylor, received standing ovations for his performance that not only included his trademark humor and, of course, a dash of confetti, but also offered a deeper and intimate look into what brought this great entertainer to the forefront of the American public. Few can boast over 2,000 TV appearances; Broadway credits; having worked with everyone from Judy Garland, Sammy Davis, Jr., Frank Sinatra, Jackie Gleason, and Eleanor Powell as well as being a three time “Entertainer of the Year” winner in Las Vegas.

Rip is without a doubt one of television’s most recognizable personalities and in “It Ain’t All Confetti,” directed by David Galligan; he puts a humorous and revealing spotlight on a career that has spanned five remarkable decades.

El Portal Theatre is a historic landmark in the San Fernando Valley located in the heart of North Hollywood just minutes from Universal Studios, Warner Brothers, Disney, ABC, CBS-Radford, NBC Burbank and sits across from the Academy of Television Arts and Sciences and the Art Institute. Since it’s opening in 1926 — first for Vaudeville, then Silent Movies, and then Academy Award-winning films. Chosen by the Smithsonian Institute as the venue for induction ceremonies to announce their first permanent Entertainment History Exhibit, in the past 10 years celebrities have starred in productions and musical reviews including Debbie Reynolds, Bea Arthur, Kitty Carlisle Hart, JoAnne Worley, Vicki Lewis, Carol Channing, The Manhattan Transfer, to name only a few and now the El Portal is thrilled to offer Rip Taylor.