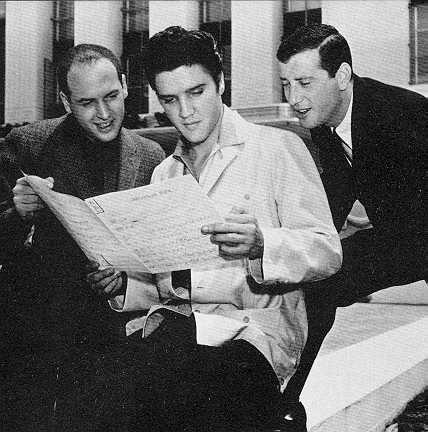 HOLLYWOOD—When Jerry Leiber and Mike Stoller began to write songs together, artists such as Amos Milburn, Floyd “Skeet” Dixon, and Jimmy Witherspoon recorded their early efforts. Their first taste of national recognition came with a song that they wrote the titled “Hard Times,” which was recorded by Charles Brown. They were not yet out of their teens. They formed an alliance with Johnny Otis, a Los Angeles based R&B artist/songwriter/promoter who, among other things, would have a top 10 pop song of his own with “Willie And The Hand Jive” later in the ”˜50s. Otis promoted a number of R&B acts including “Big Mama Thornton,” and through this connection Leiber & Stoller wrote something for her that would become a legendary song, “Hound Dog.” Thornton’s recording of the song topped the R&B charts for seven weeks in 1953. Elvis Presley was looking for good material and his agent, Colonel Tom Parker, negotiated with the prolific songwriters Jerry Leiber and Mike Stoller. One song that they had written, “Love Me,” was interpreted in an entirely different way than the songwriters had intended when Presley recorded it. They were astonished at how well he had done with it. They wrote the score for Presley’s feature films “Love Me Tender” and “Jailhouse Rock.”

Doc Pomus and Mort Schuman formed another pair of prolific Brill Building songwriters, with such hits as Elvis’s “Little Sister,” “Dion” and the Belmonts’ “A Teenager In Love” and Fabian’s “Turn Me Loose.” The two duos collaborated on some projects. Through some combination of Schuman, Pomus, Leiber and Stoller, there resulted such gems as the Coasters’ “Young Blood,” some of the songs done by Ben E. King after he left the Drifters, and some of Elvis’s hits such as “She’s Not You.” They were doing less and less songwriting but continued to work as freelance record producers in the ”˜70s, promoting such acts as Peggy Lee, Stealers Wheel, Procol Harum and T-Bone Walker.

Many of their songs were still being recorded by other artists. Jerry Leiber and Mike Stoller left a lasting impression on the pop music business through their work in the ”˜50s and ”˜60s. In 1988 their early composition that had been such a huge success, “Hound Dog,” earned a Grammy Hall Of Fame Award. In the 1990s a Broadway musical that is based on their work, “Smoky Joe’s CafÃ©,” was touring the country. Jerry and Mike are still around and occasionally appear in the mainstream media. Leiber and Stoller, who claimed, “We don’t write songs, we write records,” were inducted into the Rock and Roll Hall Of Fame in 1987.

WHAT: Jerry Leiber and Mike Stoller formed one of the best and most prolific songwriting teams of the 1950s and ”˜60s in addition to their work as record producers. Their formula was to take their love of R&B music and transform it into songs that appealed to a wide audience through their unforgettable melodies, well-conceived lyrics, and meticulous methods of producing records.

WHERE: The Palace of Mystery at the Magic Castle, 7001 Franklin Avenue in Hollywood