UNITED STATES—President Donald Trump has achieved an extensive list of accomplishments since taking the Office on January 20, 2017.

Eight days after President Trump took office, Democrats began to investigate him, in what has become known as the Mueller investigation to prove that President Trump colluded with Russian interference in the 2016 election.  No evidence of collusion was found by President Trump or his campaign.

President Trump continued his work through the Mueller investigation and then the Impeachment Inquiry.  President Trump was found not guilty and fully exonerated from charges of Abuse of Power and  obstruction of Congress on February 4, 2020.

As he was being investigated for nearly 3 years, President Trump worked to keep his campaign promises and improve our country. Statistics prove the economy under President Trump to be the strongest it has ever been in history.

As of February 7, 2020 the Bureau of Labor Statistics reports that the total of nonfarm payroll employment rose by 225,000 in January.   Notable job gains occurred in construction, healthcare, transportation, and warehousing.

PBLS collected household service data that showed that after accounting for the annual adjustments to the population controls, the civilian
labor force rose by 574,000 in January, and the labor force participation rate edged
up by 0.2 percentage point to 63.4 percent. The employment-population ratio, at 61.2
percent, changed little over the month but was up by 0.5 percentage point over the year.

The latest BLS Economic News Release can be found here.

President Trump continues to pass bills to protect the unborn from tax-funded, and late term abortions and religious freedom of college students and other American citizens.

President Trump passed two of the biggest trade deals in history, the U.S.- China trade deal that will be especially beneficial to the American farmers and the United States-Mexico-Cananda Agreement(USMCA).

On the White House web page President Trump was quoted in saying;

“We believe that trade must be fair and reciprocal.  The United States will not be taken advantage of any longer.”

The Kessler Foundation gave the rundown on the National Trends in Disability Employment(Tide) comparison of people with and without disabilities.

The end of the third quarter’s numbers are in and have been fact-checked.

The terrorists’ groups ISIS and Al Qaeda were very active when President Trump took office. Below are his efforts to battle terrorism.

“I am pleased to announce that the Syrian Democratic Forces, our partners in the fight against ISIS in Syria, have successfully recaptured Raqqah-the terrorist groups self-proclaimed Capital City.  Together, our forces have liberated the entire city from ISIS control,” said President Trump on October 21, 2017.

In a joint operation of U.S. Special Forces and Kurdish led Syrian Democratic Forces, and the cooperation of many others, along with President Trump, located ISIS leader, Abu Bakr Al Baghdadi. After being discovered, Baghdadi committed suicide and killed three of his own children by detonating his own vest on October 26.

This military operation was named after humanitarian aid, Kayla Mueller who was tortured and raped by Baghdadi.

“Abu Hassan al-Muhajir, ISIS’ spokesman and most likely first in line to the succession of ISIS leadership, was killed while allegedly on transport stashed away in an empty oil tanker in a convoy. The air-raid took out two trucks in Northern Syria near the city of Ayn al-Bayda near Jarablus. The United States and Kurdish intelligence services coordinated the assault on Sunday night,” said President Trump. 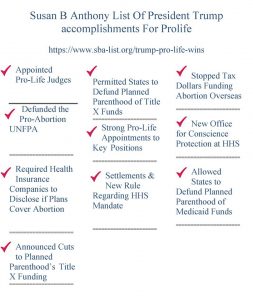 On January 25, 2017, President Trump signed Executive Order 13767, to begin construction of the border wall using existing funds. CBP along with the Army Corp of Engineers has constructed 65 miles of the border wall with 450 more miles of wall is projected to be completed by the end of 2020.

The progress being made on the wall can be seen on the We build the Wall website, or at the Customs and Border Protection website.

Little Sisters of the Poor were invited to The White House after repeatedly defending themselves against the Federal Contraceptive Mandate issued under the Affordable Care Act, which required free healthcare coverage for contraceptives, sterilization, and abortion-inducing drugs. President Trump defended them  until they won their case on November 7, 2018.

President Trump spoke on September 24, at the United Nations assembly speaking publicly in defense of persecuted Christians that the President stated make-up one-third of the world’s population.

According to the Bureau of Economic Analysis, real gross domestic product (GDP) has increased. 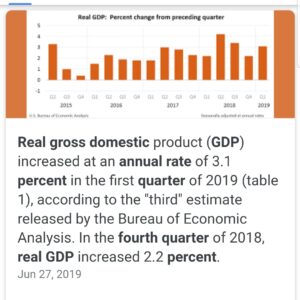 Unemployment, among the U.S. Black and Hispanic population has hit its lowest on record in the last 50 years. In August 2019, unemployment among black women dropped down to 4.4 percent. Black men saw a slight increase from 5.8 to 5.9 percent making the overall Black unemployment rate 5.5 percent.

The charts below are from the Bureau of Labor Statistics and Unemployment.

On January 23, 2017, President Trump reinstated the Mexico City Policy, known as the Global Gag Rule. The Mexico City Policy is a U.S. government policy that denies U.S. federal funding to non-governmental organizations that provide counseling or referrals for abortion. His new policies end the government funding of abortion in the U.S. and abroad.

The government has withdrawn funding to science that use human embryos for research issuing grants to find more ethical practices.

The United States-Mexico-Canada (USMCA) Trade Agreement set an unprecedented standard for agricultural biotechnology. According to the USDA website, the agreement supports 21st-century innovations in agriculture including all biotechnologies, including genome editing which involves DNA technology in farming.

Ford Motor Company canceled plans to open a new factory in Mexico, adding 700 jobs in Michigan. The 110-year-old car company ditched the building of Focus Active in China citing Chinese news source, “Looking China,” the financial toll of the Trump administration’s tariff on $50 billion worth of imports from China.

President Trump worked to improve U.S. relations with China by imposing on imports coming from China that brought back the, “Made in the USA” movement.

President Trump indicated in a statement to Fox News that some of the money from the tariffs will be given back to the American farmers unfairly targeted by Chinese products being sold on U.S. soil.

"We can't allow China to rip us off anymore as a country."President Donald J. Trump spoke to reporters after arriving at the White House.

President Trump improved relations with North Korea and the United States, which was under the threat of nuclear attack before he took office. He organized the North Korea Summit that was 60 years in the making.