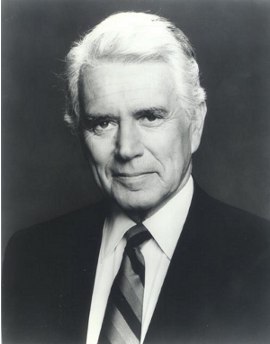 The son of a Wall Street businessman, the New Jersey-born John Forsythe, attended the University of North Carolina, and then moved to New York City where he began his career as a radio actor, then as the field announcer for the Brooklyn Dodgers at Ebbet’s Field. Soon after, he auditioned for Lee Strasburg and became one of the original-founding members of the prestigious The Actors Studio. While still in New York, Forsythe participated in many of the notable live television shows, including “Studio One,” “Philco Playhouse,” “Kraft Theatre” and “Robert Montgomery Presents,” including the award-winning and very controversial, “What Makes Sammy Run?” His first Broadway appearances in “Vickie” and “Yankee Point” led to a motion picture contract with Warner Bros. and his Hollywood debut with Cary Grant in “Destination Tokyo.”

After enlisting in the U.S. Army Air Corps during World War II, Forsythe was selected for the cast of “Winged Victory,” Moss Hart’s all service Broadway stage musical. From there he went on to starring roles in such notable Broadway productions including “Yellowjack,” “It Takes Two,” “All My Sons,” “Mr. Roberts,” the Pulitzer Prize winning “Teahouse of the August Moon” and Gore Vidal’s “Weekend.” And many years later in Los Angeles, he starred in “The Caine Mutiny Court Martial,” directed by the legendary Henry Fonda.

Upon moving to Los Angeles, John began receiving the first of numerous Emmy nominations while starring in the television series “Bachelor Father” from 1957 to 1962. At the same time, he continued to work in feature films, including Robert Wise’s “Captive City,” “It Happens Every Thursday” with Loretta Young, “The Glass Web,” and two Alfred Hitchcock films, “The Trouble with Harry” and “Topaz.” He also starred in “The Ambassador’s Daughter,” “Madame X,” Truman Capote’s “In Cold Blood,” “The Happy Ending,” “And Justice For All” and “Scrooged.”

His long personal and professional association with Aaron Spelling and Leonard Goldberg included the voice of “Charlie” in the original television series “Charlie’s Angels” and the two feature films, “Charlie’s Angels” and “Charlie’s Angels: Full Throttle.” Another Spelling/Goldberg project resulted in John Forsythe’s portrayal of Blake Carrington, the ruthless Denver oil magnate entrepreneur in “Dynasty” which won him critical acclaim as well as numerous Emmy nominations, two Golden Globe Awards for Best Actor and People’s Choice Awards. Forsythe had a distinguished list of credits from virtually every venue in the entertainment industry and his career prospered for over six decades. His hundreds of television appearances included hosting numerous Emmy Awards, Golden Globe Awards and People’s Choice Awards telecasts and serving as the master of ceremonies for various television shows, including the prestigious 1986 “Christmas in Washington” special and for the “George Burns: 80 Years in Show Business” special. Over the years, Forsythe starred in numerous “Hallmark Hall of Fame” television films, including “Amelia Earhart,” “Opposites Attract” and “On Fire,” for which he also served as executive producer. Over the years, he made numerous guest-starring appearances on such shows as “The Jack Benny Show,” “Alfred Hitchcock Presents” and “The Twilight Zone,” just to name a few. He was also the host of the syndicated nature series “World of Survival,” which ran for an amazing 14 years. In addition, Forsythe earned his nice-guy image via such memorable starring roles in his various television series, “Bachelor Father,” “The John Forsythe Show,” “To Rome With Love” and “The Powers That Be.”

Forsythe also served as executive producer, director and host-narrator of a one-hour film documentary on the life and career of legendary jockey Bill Shoemaker entitled “Nice Guys Finish First” and he appeared as host and narrator of four one-hour documentaries for Turner Broadcasting called “Portrait of Great Britain.” He also narrated numerous other documentaries including, “The Song of the Basques,” by the award-winning documentary producer, Edmund Penney and “People’s Century,” which provided a unique prospective of the extraordinary events of the 20th century told through the stories and experiences of ordinary men and women. In addition, he voiced numerous characters for various PBS children’s shows.

Mr. Forsythe was actively interested in ecology, and was a spokesperson and sponsor of the World Wildlife Fund. He supported the American Cancer Society and the United Nations Association. One of his life’s greatest passions was owning, breeding and racing his thoroughbred horses and he was Vice President of Hollywood Park Racetrack in Los Angeles for four years and was a member of the Board of Directors at the same racetrack for eleven years and hosted the prestigious Eclipse Awards every year for many years.

Film star Tippi Hedren, who knew John for many years tells Canyon News exclusively, “John (Forsythe) was one of the most memorable friends in my life. Frankly, there are so many perfect aspects of this man it would take a book to define this knock-out gorgeous man. He was very fond of the lions and tigers I live with, too!” John made television history as the patriarch of the fabled Carrington clan on “Dynasty” which became one of the most successful television dramas in TV history.

John Forsythe was married three times. First, very briefly to Parker McCormick (1938-1940), then to Julie Warren (1943 until her death in 1994) and Nicole Carter-Forsythe (2002 to present). He is survived by his beloved family including his wife, Nicole, his son and daughter-in-law, Dall and Ana Marie Forsythe, his two grown daughters, Page Courtemanche and Brooke Forsythe as well as six grandchildren (Deborah, Susanna, Raquel, Juliana, Alexandra and John) and five great-grandchildren.

In lieu of flowers, John’s wife and family would like to request donations to the American Cancer Society. There will be no public service.