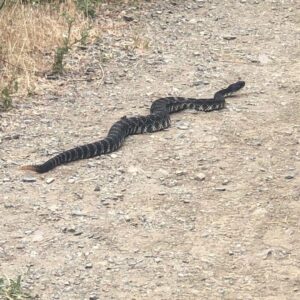 Los Angeles County Fire Department dispatched a fireman to Elwes’ home on Topanga State Beach at approximately 2:53 p.m. Reports indicate that EMS first responders airlifted an unnamed patient who had been bitten on the finger by a rattlesnake to Ronald Reagan UCLA Medical Center.

Elwes took to social media referencing his 2017 film, “Rodents of Unusual Size,” which is about swamp rats [Nutria] invading southern Louisiana. Elwes was doing yard work when he was bitten by the snake.

According to the California Department of Fish and Wildlife, out of the 40 snakes that slither around California, rattlesnakes are the state’s only venomous snakes.

“Taxonomy fluctuates, but we have approximately 40 native snake species, of which 7 are rattlesnakes: western diamondback, sidewinder, speckled, western, red diamond, Mohave, and Panamint,” the California Department of Fish and Wildlife stated on their website.

According to bestcamping.com, the venom or hemotoxins from a rattlesnake bite can cause excruciating pain, a breakdown of tissue, and can cause internal bleeding.

If bitten by a rattlesnake individuals are advised to:

• Do Not apply ice or soak the bite in water

• Leave the wound treatment to professionals