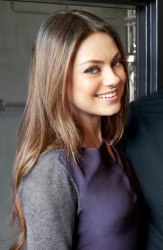 HOLLYWOOD – Actress Mila Kunis is going to be a mommy. According to People magazine, Kunis is expecting her first child with fiance Ashton Kutcher. The couple co-starred on the Fox hit “That 70s Show.” They recently began dating back in 2012.

This will be the first child for both Kunis and Kutcher. The actress will next appear on the big screen this summer co-starring alongside Channing Tatum in “Jupiter Ascending,” a sci-fi thriller that will hit theaters on July 18.