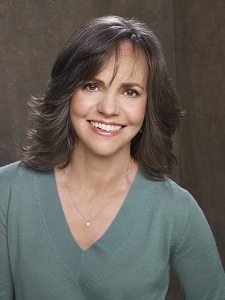 HOLLYWOOD HILLS-Actress Sally Field was honored with a star on the Walk of Fame on May 5.

The television and film veteran received the 2,524th star on the Walk in honor of her decades-long career that began with the 1965 TV series “Gidget,” where she played the titular character.

“We are thrilled to be adding one of Hollywood’s all-time favorite actresses to the Hollywood Walk of Fame,” said Ana Martinez, Producer of the Walk of Fame ceremonies in a statement.

Following the single season of “Gidget,” Field went on to star for three seasons on “The Flying Nun.” She also sang the series’ theme song “Who Needs Wings to Fly,” which made it onto the Billboard Hot 100 in 1967. She then won her first Emmy in 1977 for starring as a woman diagnosed with multiple personality disorder in the television film “Sybil,” which aired in 1976.

Field’s film career rocketed to stardom when she starred opposite Burt Reynolds in the 1977 film “Smokey and the Bandit.” Two years later, she won her first Academy Award for Best Actress in “Norma Rae.” The 1984 film “Places in the Heart” netted her a second Oscar win and one of the most famous acceptance speeches in the history of the Academy Awards. Field earned more accolades over the years, including a 2001 Emmy win for her recurring role in “ER.”

Her film career is marked with dozens of roles in films as “Mrs. Doubtfire,” “Forrest Gump,” and “Eye for an Eye.” She also starred in the 2006 television series “Brothers and Sisters,” a role that earned her another Emmy in 2007. Most recently, she starred opposite Daniel Day Lewis in Steven Spielberg’s “Lincoln” and played the role of Aunt May in “The Amazing Spider-Man” and its sequel. Field has tried her hand in directing, by taking the reigns in the film “The Christmas Tree,” an episode of the 1998 HBO miniseries “From the Earth to the Moon,” and the 2000 feature film “Beautiful” starring Minnie Driver.

“The joy that she brings to the workplace is absolutely infectious,” said friend and actor Beau Bridges at the event. “Her presence makes everyone around her want to be the best that they can be.”