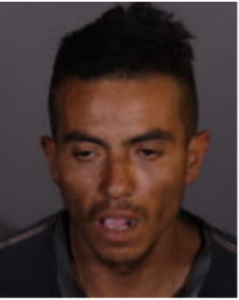 LOS ANGELES—The Los Angeles Police Department is requesting the public’s help to locate additional victims of a vandalism suspect who has been taken into police custody. The LAPD reported on August 26, patrol officers from the Los Angeles Police Department’s Wilshire Division responded to the 2200 block of South Longwood Avenue and completed a report for misdemeanor vandalism. On Monday, August 29, Wilshire Senior Lead Officers arrested Walter Salmeron, 28, of Los Angeles (Booking #6453874) for possession of narcotics and outstanding warrants.

Salmeron was spotted on someone’s roof damaging solar, but that incident occurred in February 2021 and the suspect was arrested for the incident in March 2021. Any claims for damage to public power lines belonging to the city of Los Angeles (LADWP) have not yet been substantiated.

Wilshire Detectives are attempting to locate other victims, witnesses, video, or evidence that can directly tie the above suspect to any non-functional streetlights in that neighborhood or any other crime in the 2200 block of South Longwood Avenue.