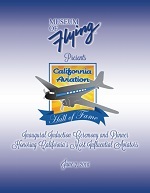 SANTA MONICA-As stated on their website, the Museum of Flying was established in 1974 as the Douglas Museum and Library. The museum will honor its past and its ‘first class’ with the upcoming event, the “Inaugural Ceremony and Dinner” which will take place inside the museum. Dan Ryan of the Museum of Flying informed Canyon News that the event is limited to the first 350 guests, and will take place on June 7, where the reception will start at 6 p.m., along with dinner and the program at 7 p.m.

The museum first opened to the public in 1979 at 3200 Airport Avenue.  The museum was founded by Donald Douglas Jr., the second President of the Douglas Aircraft Company.

The collection consisted primarily of artifacts owned by Donald Wills Douglas, the Founder and President of the Douglas Aircraft Company, where the collection did not include any aircraft. Over the years, the museum has hosted many galas and events, the closing of its doors, a new location on the south side of the Santa Monica Airport, (which is just a half a block away from the original location) and finally re-construction back in 2009.

For the special event, the committee has chosen, Dr.Buzz Aldrin, Clay Lacy, Bob Hoover, and Frank Robinson, as the California Aviation Hall of Fame Inaugural Inductees. These inductees are well known for being notable aviation and aerospace executives and have all been nominated. Dr. Buzz Aldrin is widely known for his BS in mechanical engineering. He is one of the first two humans to set foot on the moon, as he and Neil Armstrong made their historic Apollo XI moonwalk on July 20, 1969.

Clay Lacy is recognized for previously joining United Airlines in the right seat of DC-3’s and for having flown the Douglas prop airliners, the DC-8, DC-10, 727, as well as the 747-400. Bob Hoover who is considered by many as the “pilots of pilots,” will be recognized for serving his country as a fighter and test pilot. He is also a master in aerobatics.

Frank Robinson, who began his career in 1957 at the Cessna Aircraft Company, is known best for working on the CH-1 Skyhook helicopter. Robinson eventually moved to the Hughes Helicopter Company where he began to work on different R&D projects. He eventually resigned and founded the Robinson Helicopter Company in 1973.

Interested participants can buy tickets online for $350 to attend the dinner and ceremony. For any additional information check out the website at http://www.museumofflying.com.

AMC Theatres In Santa Monica At Risk Of Closure

Stock Market On The Rise