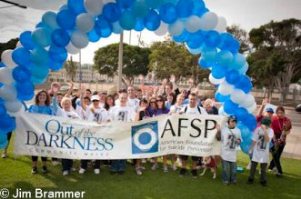 SANTA MONICA—The American Foundation for Suicide Prevention is the leading national not-for-profit organization exclusively dedicated to understanding and preventing suicide through research, education and advocacy as well as reaching out to people with mental disorders and those affected by suicide.

With the rise of suicides in the news for teenagers, the local group decided to bring awareness to cyber bullying, which teens are particularly vulnerable to. The area director, Laura Levinsky, spoke at the event to Canyon News about the issues facing our community and around the nation. “The event brings awareness to suicide prevention for all socioeconomic groups,” said Levinsky. “Too many of our young people are succumbing to the effects of bullying. Bullying should not be accepted as a daily part of life. They need to know there are places to turn for help and support. We, as a community, need to do more to put an end to bullying and cyber-bullying.”

Mental health resource programs including the LA County Department of Mental Health and Didi Hirsch Mental Health Services were among the groups which attended the October 23 walk. Outreach programs such as Teen Line and Trevor Project were also in attendance.

The groups discussed suicide prevention, and most importantly, to provide much-needed resources to walk participants who may need assistance. The Los Angeles community walk began at Santa Monica City Hall at 9 a.m. and ended at the same location at approximately 11:30 a.m. In addition to AFSP supporters, Mark and Shirley Ballas from “Dancing With The Stars” and many other celebrities attended.

Gary Bryan from K-EARTH 101 served as the Master of Ceremonies for the event with Actress/Author Mariette Hartley and Actor/Writer Jerry Sroka hosting. “The walks are our largest public events and to create change we are going to need the entire community to become involved,” said Levinsky.
To learn how you can make a difference go to afsp.org/losangeles.