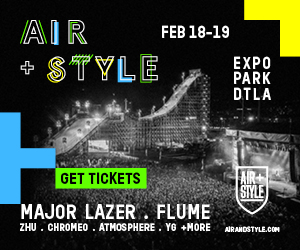 LOS ANGELES—Real snow descends on Los Angeles this weekend at Exposition Park, for the 3rd Air + Style show on Saturday, February 18, and Sunday, February 19. An incredible 16-story wall of snow will be the launching point for the sports most daring snowboarders. Best part-no snow chains will be required!

Air + Style is a global big air snowboard competition and music festival that features world-class action sports athletes and musicians along with art, community and culture during a two-day event series.

Shaun White is to snowboarding what Muhammad Ali was for boxing. The two-time Olympic Gold medalist and king of the X-games is a majority share holder of Air + Style. All that thin air must be good for the brain, as White brought the hugely successful event to the Southland.

“We’re doing it! Once was cool. The second time was awesome. This third time, we are really starting to establish ourselves as an event. It has surpassed every expectation, and I’m so psyched with the insane names that are invited this year to compete in Los Angeles,” beamed the flying tomato, Whites nickname.

This winter wonderland will happen rain or shine! The musical lineup performing on the aptly named, Winter and Summer stages is awesome. Flume, TV On The Radio, Chromeo, Major Lazer and L.A.’ newest rap sensation, YG.

YG is supporting his latest release, “Still Brazy” he’s bringing back gangsta rap to the masses. The two-day fest begins at 2:00 p.m.

Tickets are quite affordable, ranging from $79 for a General Admission, Two day passes are going for $139.  Exposition Park is located at 701 State Dr. For more information on purchasing tickets, visit: www.airandstyle.com.