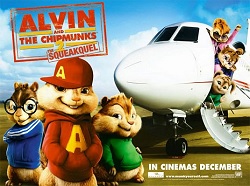 HOLLYWOOD—There is something about children’s films that appeal more to adults than children. “Alvin and the Chipmunks: The Squeakquel,” a follow-up to the 2007 hit is a hilarious riot that is enjoyable for the entire family; you’ll laugh so hard it’ll hurt. I recall watching the cartoon ages ago when I was a kid; it was one of my favorites. How can anyone forget that infamous line yelled by Dave, the chipmunks’ caretaker? This time around, the chipmunks (Alvin, Simon and Theodore) who have become instant celebrities thanks to their unique singing talent have just started high school.

The pressures of fitting in and dealing with their celebrity has proven a bit of the problem for the trio. Alvin (voiced by Justin Long) is the center of attention as always. He likes to flirt with the ladies and wants to be the cool kid in school, but Alvin soon discovers that fitting in may cost him in the long run.  He’s a jokester and his one-liners in the film are quick, witty and amusing.  Alvin joining the football team drives a larger wedge between him and his brothers, especially after the school principal, Dr. Rubin (Wendy Malick) enlists the chipmunks help in a singing challenge that could help save the schools music program.

He finds himself torn between the pressures at school, standing up for his brothers, Simon (voiced by Matthew Gray Gubler) and Theodore (voiced by Jesse McCartney) who are being bullied at school and fulfilling his singing commitment. As adults, it’s something that we all identify with; we recall those first moments in school where we felt like an outcast and that difficult journey we all took to become “noticed.” If dealing with the school bullies wasn’t enough, the trio finds themselves competing with a new singing sensation The Chipettes, Brittney (voiced by Christina Applegate), Eleanor (voiced by Amy Poehler) and Jeanette (voiced by Anna Farris). The guys are smitten by the girl’s beauty at first glance.

Several funny moments in the film occur between the chipmunks and the bullies at school, between giving out wedgies and swirlies, there’s something for everyone. What will really have audiences in the aisles is the singing numbers. Between having The Chipettes take on Katy Perry’s “Hot N Cold” to the climatic moment where they give their rendition of Beyonce’s “Single Ladies (Put a Ring on It),” you can’t help, but fall down laughing. There’s also the interaction between Toby (Zachary Levi) and the chipmunks that are under his care, while Dave (Jason Lee) recovers at the hospital. Injuries he sustained likely at the hands of Alvin, our little troublemaker. Toby is a complete goofball and klutz. He provides some very funny moments in the film. Toby’s own horrors of school are no help for Theodore who tries to keep the bond between him and his brothers strong.

There’s even that awkward moment between Toby and Becca (Bridgit Mendler) that delivers a few chuckles, but it is Ian (David Cross) who steals the show as the greedy music exec desperate to find the next great thing in pop music with The Chipettes. Let’s just say he finds out the hard way that Alvin will go to great lengths to protect the ones that he loves. Ian’s impersonation of Beyonce’s ubiquitous hit will leave the little ones with bellyaches.

The message in the film is universal: at what cost are you willing to go to achieve your dream? Is it worth hurting the ones that matter in your lives and what are you willing to give up in order to do that?  It’s a message that many tweens will easily grasp, the younger ones, it may take awhile. “Alvin and the Chipmunks: The Squeakquel” is a comical feature worth every penny. I saw film with my nieces and nephews and I think I giggled more than they did.  Take the trip to the multiplex to see this family flick, you’ll be smiling afterward.