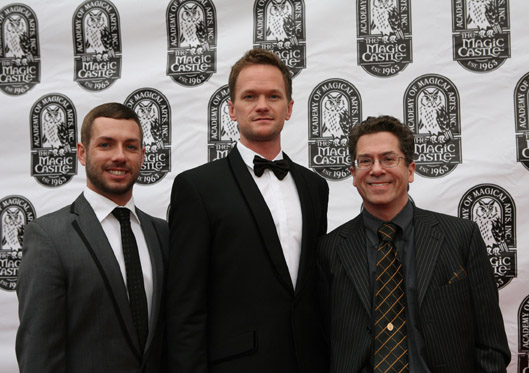 HOLLYWOOD —A sold out crowd filled the Avalon Hollywood Theatre on Sunday night, April 11, for the 42nd annual Academy of Magical Arts Awards. The evening was not only hosted, but also co-produced by the popular Neil Patrick Harris. The evening’s color commentary was offered by the always-funny Jason Alexander.

Often referred to as the Oscars, Grammys or TONYS of magic, the 2009 Academy of Magical Arts Awards (AMAA) are dedicated to honoring the best in the illustrious world of illusion. However, unlike its award contemporaries, the show dedicates a larger part of the evening to entertainment with both jaw dropping and humorous performances by talented individuals such as Rudy Coby, The Great Tomsoni & Co., Armando Lucero, Yo Kato, Andrew Goldenhersh, Jeff Hobson, John Calvert and Ed Alonzo.

The presenters for the festivities included: Christina Hendricks, Jeff Probst, Mark Wilson, Max Maven, Mac King, Larry Wilmore and Nigel Lythgoe. Among those in attendance were Magic Castle regulars including Alison Arngrim, Nathan Fillion, Kate Linder, Kelly LeBrock, Lynette Chappell and Lee Roy Reams (who is the next Broadway icon to appear at the Castle’s Cabaret at the Castle).

Formerly known worldwide as “The Palace,” the Avalon Hollywood has been restored to its original Hollywood-era glory by Boston-based nightclub impresarios, the Lyons Group. With its historic pedigree and present popularity, it was the perfect venue for the 2009 AMA Awards. The art of illusion has been a favorite form of entertainment since before written history. It has fascinated audiences of stage and screen here in America as a standard in the early Vaudeville houses to today’s Broadway hits such as “Wicked!” The Academy of Magical Arts have recognized some of the greatest magicians of all time including Siegfried and Roy, Doug Henning, Lance Burton, David Copperfield, Penn & Teller, and championed the original and the restoration of Harry Houdini’s star on the Hollywood Walk of Fame. The Academy is housed in the world famous Magic Castle, whose structure (originally the Lane Mansion) celebrated its 100 anniversary in 2009. The private club boasts an equally impressive membership over the years that has included Cary Grant, Johnny Carson, Carol Channing, Dom Deluise, Tippi Hedren, Hugh Hefner, Rose Marie, Hugh O’Brian, Florence Henderson, Jason Alexander, Christina Hicks, Johnny Depp, Loni Anderson, Rip Taylor and its recently voted Vice President, Mr. Neil Patrick Harris, to name only a few.