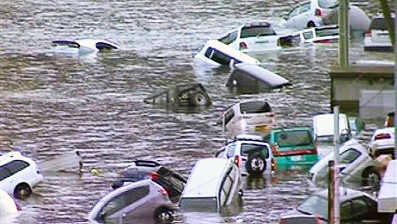 WASHINGTON D.C.—Last week, as Americans slept, Japan suffered a catastrophic 9.0 earthquake that crippled their nation and, soon after, a tsunami hit their northern coastline. The disaster’s after effects have left Japan reeling in shock, but its people have shown a strong will. Japan is a very modern nation with heavy regulations in place in order to build their cities and structures with the greatest success rate of withstanding an earthquake. However, the damage of the tsunami took a heavy toll that could not have been prepared for.

Japan’s central government, which is equivalent to our federal government, is less bulky, very concise and adept at the process of dealing with tragedies. Certainly the Red Cross and other nations’ governments, such as our own, have benefited the people of Japan and brought in water, food and clothing to a battered region that now faces yet another nuclear holocaust. However, Japan’s government is capable of hiding serious matters from their people and the world, but as a whole, the Japanese nation was considered the most equipped nation in the 21st century at handling disasters, whereas the U.S. is far below the top of the list.

Perhaps our blood sport politics for the past 25 years have caused a great deal of turmoil and have been detrimental to our stability and our ability to withstand the unexpected in the modern world. Our military, however, is second to none. Whenever it’s needed the Defense Department is capable and willing with an all-volunteer army to deploy to any place in the world in the least amount of time of any military in history. Our diplomacy is strong and America is still the most respected nation in the world.

However, after Hurricane Katrina, Americans found out that our nation is crippled with government red-tape and an inability to successfully maneuver government assets, which are vast and great, but still very limited due to political bickering and partisanship. Instead of facing our limitations and fixing them, the political left used Hurricane Katrina to accuse the Bush Administration of uncaring and incompetence when handling victims of the category four hurricane.

During the oil spill in the Gulf of Mexico, the political right attacked the Obama Administration as being unconcerned and even arrogant about its handling of the disaster. That’s simply what we do in America. While prior to our Golden Age of the late 20th century Americans often put aside politics to pull together and bring the nation back to its glory. It did so in some small but sincere manner post Civil War time, during the Great Depression and during both WWI and WWII. The Japanese people, though worn out and weary from the disaster, are not calling for the heads of their leadership. They are trying to survive and praying for a possible nuclear disaster to be averted.

Due to our nation’s history, our federal government is almost handicapped by states’ rights issues. It depends on whether a state is red or blue in order for the current president of our nation to be welcomed with open arms for trying to help or for trying to uplift the nation. If we do not amend this hate we are on a course for disaster, the likes of which we cannot even imagine.

What has made America great in the past is its ability to learn from others and to use our own ambition and hard work to improve our lot in life. Perhaps we should learn patriotism and respect that the Japanese are showing their nation. When our next disaster occurs, let’s put country before politics.

Majority Arrested In Santa Monica Not From City