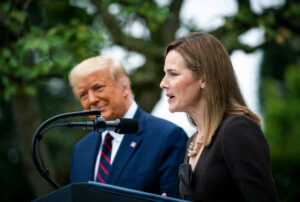 On September 22, President Trump announced his intent to nominate Barrett to the U.S. Supreme Court. Barrett has been publicly criticized for her Catholic faith and pro-life views. Chuck Schumer, Speaker of the House Nancy Pelosi, and Presidential candidate Joe Biden who have been openly pro-abortion are attempting to withhold the confirmation of a Supreme Court Justice until after the election to lessen the chance of having a conservative majority on the nation’s highest court

Received a call from President @realDonaldTrump tonight. He's feeling great and working hard for the American people. Told him I'm recovering and look forward to getting back to the Senate and confirming Judge Amy Coney Barrett.

“The party of ‘inclusion’ & ‘tolerance,’ thinks it is ok to bash a person b/c of her religion! While it has long been acceptable to Democrats to criticize Catholics, the depths of their current smear campaign on Amy Coney Barrett is unprecedented! Imagine she was a Muslim,” @DollyMariaMadi1 commented.

“A vote by any Senator for Judge Amy Coney Barrett is a vote to eliminate healthcare for millions in the middle of the COVID pandemic,” tweeted Schumer.