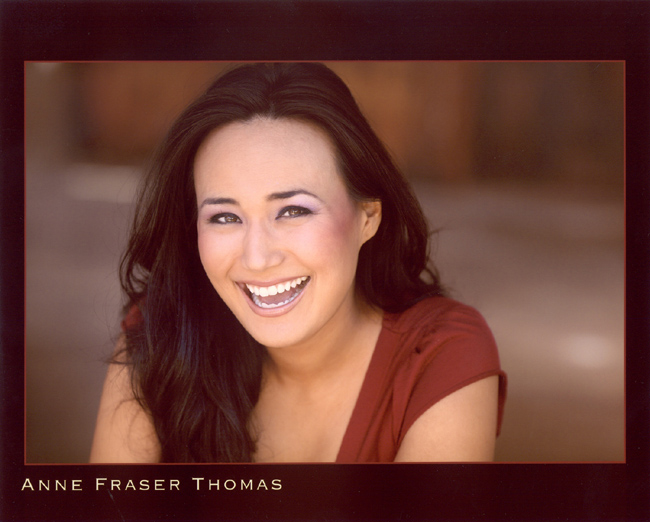 HOLLYWOOD —Anne Fraser Thomas has been featured as an actress and singer across the continent. Originally from Southern California, she received her theater degree from UC Irvine and has been seen on most of the regional stages in the area. She has recently spent much of her time in New York, where she has been seen in numerous readings, workshops, cabarets in the city and has become a sought-after interpreter of new composers’ works and a ”˜nightlife diva.’ She is pleased to be returning to Los Angeles for her first West Coast appearance in 2010.

Her regional theater credits include, Mama Who in “How The Grinch Stole Christmas” (Old Globe), Fantine in “Les Miserables” (Moonlight Amphitheatre), Aldonza in “Man Of La Mancha” (Performance Riverside), Narrator in “Joseph and the Amazing Technicolor Dreamcoat” (Welk Resort), Lady Thaing in “The King and I” (Carousel Theatre), and touring across North America with “VOX LUMIERE” as the Evil Diva/Coloratura Soprano as well as shows with Musical Theatre West, Reprise, the Geffen Playhouse, East West Players, San Gabriel Valley Music Theatre, Hermosa Beach Playhouse and more. She has been a performer in various shows at the Disneyland Resort for over five years, including “Aladdin: A Musical Spectacular.” New York credits include the workshop of the new Frank Wildhorn musical “Tears Of Heaven” and numerous new works through both BMI and NYU’s Graduate Musical Theatre Writing Program. She is a proud member of Musical Theatre Guild, and is an active voiceover artist.

WHAT: As a cabaret artist, Anne has made a name for herself on both coasts, including Upright Cabaret, Ryan Black’s 88s Cabaret, Musical Mondays at Eleven, and Caffeinated Cabaret in Los Angeles; and in New York, Birdland, Joe’s Pub, Metropolitan Room, Laurie Beechman, Duplex, Splash Bar, Bartini, Therapy and G-Lounge. She recently made both her Carnegie Hall and Lincoln Center debuts, singing the works of emerging composers.