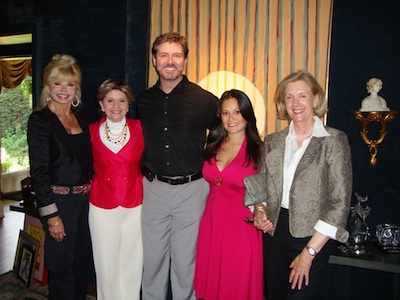 BRENTWOOD—Hollywood’s most famous funny lady stole the thunder from the Emmys on Sunday night. At least for an elite group of Hollywood stars and insiders. “You know you’re old if they have discontinued your blood type,” says Phyllis Diller, who at 93 is still entertaining audiences everywhere, even in her own home. Recently, Ms. Diller (or Madame as many refer to her) opened her home for colleague and friend, B. Harlan Boll, a gentleman whom Liz Smith once referred to as “Tinseltown’s PR Pro.” He is a fan and collector of Ms. Diller’s artwork since he was introduced to her years earlier while working for Bob and Dolores Hope, Boll was offered one of the increasingly rare opportunities to invite friends to the Diller estate in order to experience and/or even buy prints, giclees and/or original paintings by the hand of the great comedian herself. Also open to the gathering was the door to Ms. Diller’s costume room, which consists of a treasure trove of gowns, wigs and jewelry worn over the years by Diller herself at engagements ranging from night clubs and national television shows to entertaining the troops with Bob Hope

Among the patrons who opted to forgo the 62nd Annual Emmy Awards, held the same night, were my friends Gloria Allred, Loni Anderson, Channing Chase, Romi Dames and Shelly Goldstein, to name a few. Freely admitting that Diller’s isn’t the only artwork he collects, Boll recalls other pieces by Peter Falk, Tony Curtis, Dom DeLuise, Norman Rockwell, Mr. Blackwell, Dwayne Hickman, Tommy Tune, Eve Plumb, and of particular personal interest, works by the late great “Line King,” Al Hirschfeld. “Tommy, I’m more than just a fan of Madame’s,” says Boll, “I admire both the woman and her work. On stage, on camera and on canvas. In every sense of the word, she is the definition of an Artist.” When asked, what prize he left with that night, Boll proudly displays an only existing copy of sheet music for the “Phyllis Fugue,” an original composition from 1937 by concert pianist, Phyllis Diller.

Found among his collection of traditional works of art are framed original musical scores by celebrated composers such as Cy Coleman, Richard Sherman, Charles Fox, Henry Mancini, Charles Straus, and Boll’s personal favorite, “The most talented man I know, Jerry Herman. Artistic ability is more than the use of chalk, oils, ink or pastels on canvas,” remarks Boll, “It’s poetry, architecture, fashion and music. Anything that expresses who someone is or how they think or feel. It allows you to communicate and, perhaps more importantly, it challenges the mind to stretch and understand the world and people around them.”

Both Diller and Boll are supporters of The Dr Carol Channing and Harry Kullijian Foundation for the Arts (ChanningArts.org). An organization founded by their dear friend Carol Channing and her husband Harry Kullijian, whose purpose is to restore the arts back into their proper place in the public school system. Diller recalls Channing’s motto “We are not trying to save the arts. We are trying to help the arts save our children.”

Earlier in 2010, Boll was up for Daytime Emmy consideration, as producer and director, for his work on a PSA for the foundation (link:http://www.youtube.com/watch?v=0d3Uf-QG3Zk).

As the evening came to a close, Madame Diller warned her guests of a new medical crisis, “Doctors are reporting that many men are having allergic reactions to latex condoms. They say they cause severe swelling. Personally, I don’t see the problem.”