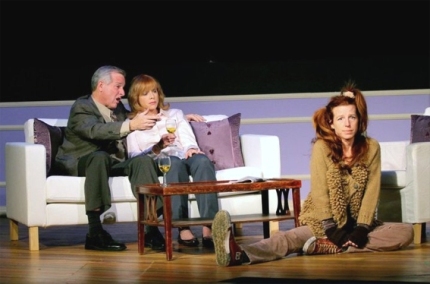 STUDIO CITY—Cathy Arden has recently taken Hollywood by storm. The beautiful actress is currently on stage in Sierra Madre performing in “Sylvia.” Cathy has appeared in many acclaimed films and plays in the past; however, she recently relocated from her home in New York to pursue her acting career on a full time basis. After winning such praise for her wondrous performance in “Sylvia,” chances are the beautiful blonde stunner is going to find work on a regular basis.

In addition to acting, Cathy’s also been a professional writer and journalist. She completed her memoir “My Sister’s Picture” and it was published by Simon and Schuster. The actress is very proud of her two children, who are now young adults. She’s now taking the time to pursue her dreams, with her family’s blessing. Her most acclaimed performance came in “The Mask” by Peter Bogdanovich. Though she’s also appeared on “Guiding Light” and “Gossip Girl.””

It’s her latest creation as Kate in “Sylvia” that has most of Hollywood astir over her tremendously powerful and unique dramatic performance as a woman who is fighting to save her marriage during a time when her husband seems to have temporary insanity, to say the least. Her desire to work with Tanna Frederick has paid off. The two ladies give such amazing performances on stage. Cathy recently spoke exclusively with us about her decision to move to L.A., and a lot more.

Q-Since moving to L.A., is “Sylvia” your first play?

A-“I moved to L.A. from New York last September on Labor Day. Just a few months ago. I booked the role of Kate in ”˜Sylvia’ just two months after I arrived here. Which was a great moment on many levels ”“ first, it liberated me from spending way too much time at Bed, Bath and Beyond getting all the necessary items for my house! The casting notice came to me via e-mail from Backstage ”“ I had no idea where Sierra Madre was, nor did I know anything about the Sierra Madre Playhouse. But when I researched A.R. Gurney’s play, ”˜Sylvia,’ my heart started beating very fast! I was being called in for the role of Kate, a role Blythe Danner played in the original ”˜Sylvia’ on Broadway. How could I possibly resist a role played by my idol, Blythe Danner? So even when I discovered it would be a lot of driving time for me from west L.A., where I live, to Sierra Madre, I went for it! And I was so excited to be cast in this role!

Q-How did you ever get into this type of character, who felt compelled to fight for her marriage when her husband was going through a midlife crisis?

A-“I really identified and loved Kate from the start. She has a lot of courage and chutzpah, and has begun a new life, following her passion, after her youngest child has gone off to college. This is, in fact, what I’ve just done as well! In my own life, I’ve raised two children who are now grown, my youngest child has just gone off to college, and after a career as a writer (fiction, non-fiction, poetry, journalism), I’ve returned to my first love which is acting. You might say this role as Kate in ”˜Sylvia’ is my comeback! I think Kate deals with her own midlife crisis by plunging into work she feels passionate about, and her husband gravitates toward the unconditional love of his new dog, Sylvia, as a way of bridging the sometimes frightening reality of the empty nest and of aging.

Next week runs part two of my interview with the actress. In the meantime, to learn more about the star, go to her official website at cathyarden.com.