In an April 30 press release, the Portland Police Bureau and Portland Fire and Rescue responded to a call of injuries describing the incident saying, “Suspects cause injuries to two people using fireworks downtown.”

Authorities encouraged callers to meet them at an outside location in an effort to deescalate the violence.

According to the report, one adult male was injured on the hand, and one adult female complained of hearing loss. Evidence at the scene revealed that fireworks were thrown during the protest and balloons filled with what appeared to be a paint solution were also thrown.

Video footage taken at the scene near Southwest 3rd and Main Streets depicted members of Antifa encroaching upon protestors. “It’s time to call the PD,” said one protestor. Officers were nearby, but smoke bombs were dropped and Antifa members were shown picking them up.

This is what happens when a Republican dares to hold an event in Portland to talk about funding our police. Antifa shows up. Well we won’t be intimidated and stop speaking the truth. #WarOnWoke #orpol #orgov pic.twitter.com/tBRiHMao7W

In a second Tweet, Mayor Pullam sent out a press release with plans to lock up Antifa. He is running to unseat incumbent, Kate Brown who has served as governor of the state since February 18, 2015.

According to a poll released by Morning Consult on May 1, Brown is the least favored governor in the nation. Brown and the city officials in Portland have been under scrutiny for the violence in Portland and defund the police efforts in the city since riots that erupted after the murder of George Floyd. 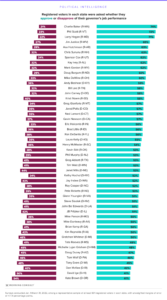 Governor Brown has been publicly blamed for allowing riots to escalate. She denied the opportunity during the Trump Administration to use the National Guard during riots in Portland and other cities in the state. A total of 92 homicides transpired in 2021 and are expected to surpass these numbers in 2022.