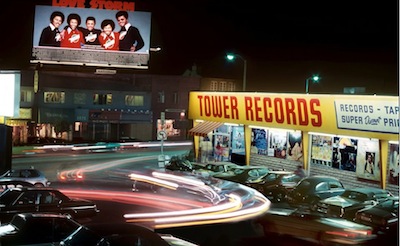 WEST HOLLYWOOD—The iconic Tower Records store on the Sunset Strip will get a second chance for preservation at a city council meeting on November 18.

The City of West Hollywood will bring forth an appeal by local resident Jerome Cleary to preserve the Tower Record store as a cultural resource during a regular city council meeting on Monday, November 18 at 6:30 p.m.

The historic retail music store located on 8801 Sunset Blvd. opened in 1970, where it served as the cultural hub in Hollywood for nearly four decades. Celebrities and famous musicians such as Elton John, Mariah Carey, and Duran Duran were known to show up unannounced and perform concerts, sign autographs or simply shop for records, CDs, tapes and the like.

The Tower Records chain filed bankruptcy and the store on the Sunset Strip—once boasting as “the largest record store in the nation”—closed in 2006.  Kaitlin Egan, Acting Public Information Officer of the City, told Canyon News via email that in 2007, a cultural resource nomination was submitted to preserve the Tower Records store.

The application was by Domenic Priore, author of books such as “Riot on Sunset Strip: Rock ‘n’ Roll’s Last Stand in Hollywood 1965-1966.” According to Egan, the nomination was placed on hold due to conflicting plans submitted around the same time by a party interested in redeveloping the site, which were ultimately rejected by the City.

In March and April 2013, the Historic Preservation Commission reviewed the proposal for historic preservation, but “voted to deny the designation, adopting the resolution in July recommending that City Council deny it and direct some other form of recognition that Tower Records was there at some point,” Egan wrote.

Local resident Jerome Cleary appealed the City’s decision to give the Tower Records store one more chance at becoming a Hollywood cultural monument. Cleary created a petition at www.change.org for music fans and community members to sign, asking West Hollywood City Council members to preserve “the most significant location and history of music on the Sunset Strip.”

The online letter request the location and structure of the Tower Records store be preserved and that “A plaque, a sign or corner will not do justice to the deep music history that Tower Records carved out into the Sunset Strip.”

The petition concludes by stating, “The City of West Hollywood needs to ensure this part of history and help make history by preserving one of the most popular and world famous record stores ever – Tower Records on the Sunset Strip.” The petition has over 1,700 signatures.

Egan noted that the City has been receiving numerous emails from community members who both support and are against preserving the store as a cultural resource.

The City Council meeting located at the West Hollywood Library’s first floor city council chambers on 625 North San Vicente Boulevard is open for the public to attend and to voice opinions during the appeal.

Jerome Cleary, also set up an online fundraising account at www.gofundme.com to raise funds to hire experts for the appeal. As of Wednesday, November 13 the campaign had raised $225 of the goal amount of $5,000.

The fundraiser webpage features a video clip of the voice of John Lennon of the Beatles advertising the Hollywood Tower Records Store. Lennon proclaims, “The largest record store in the known universe lives up to its name, Shock Tower Records in the heart of the Sunset Strip, open tonight and every night of the year until midnight. It is a good place.” The video was produced by Chris Lango and video services by Steve Davis of www.towerrecordsproject.org.