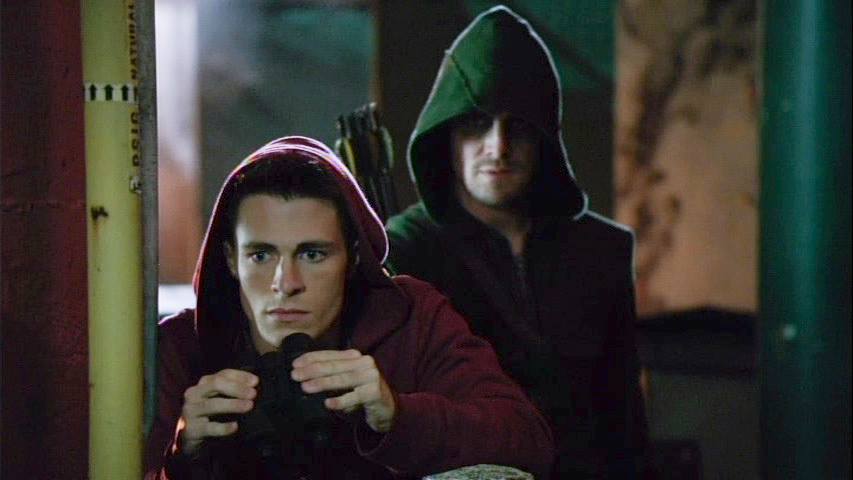 HOLLYWOOD—Last week’s episode of “Arrow” was indeed one that left many audiences gasping for air. While we are still wrapping our heads around the notion that Sarah Lance (Caity Lotz) is Black Canary (I kind of suspected this weeks ago), the surprise that Malcolm Merlyn (John Barrowman), was alive and still out for vengeance was stunning to say the least. Sometimes a show can deliver surprises that the audience expects; however, I don’t think a soul in the world could have expected this revelation. But before we can decipher, who, where, what, when and how, of Merlyn’s shocking return, let’s examine the events that led up to it.

Oliver Queen (Stephen Amell) is still trying to find his moral standards when it comes to being the hero that Starling City needs.  At times, he’s turned over a leaf it appears, but any situation can force ‘The Hood’ as he’s formerly known, to go back to place of familiarity. The episode “State v. Queen” placed much focus on the trial of Moira Queen (Susanna Thompson) for her cover up in allowing Malcolm to carry out his plan to destroy the Glades claiming hundreds of lives.

For weeks, the audience was well aware that the matriarch was keeping a secret from Oliver and Thea (Willa Holland), as her attorney pressed her to unveil the news, but she was against it.  Laurel is faced to take over the case, after her boss, the assistant district attorney is poisoned by the Count who recently escaped captivity.  Laurel is a character that is hard to read, at times she comes across quite sincere, but at other points she can be a hard nose; the loss of people that she cares about could be that factor.  Just when the audience suspects Oliver or Detective Lance would unveil the bombshell to the semi-depressed Laurel, they keep it a secret to protect her.  I can only imagine the rage she unleashes when she does discover the truth. Things will not be pretty to say the least.

During the intense trial, Laurel reveals that Moira had an affair with Malcolm; that news sent Oli and Thea in a whirl spin.  Thea was already upset with her mother over the countless secrets she has kept, wait until the bombshell Malcolm revealed hits her.  That girl has been through a lot and things are only about to getting tougher in the coming weeks.

After Diggle (David Ramsey) becomes a victim of the Count, Felicity (Emily Bett Rickards) decides to take action to catch the culprit, but ultimately, finds herself being held captive.  It appears the damsel in distress and the love interests always find themselves in dire situations.  If it’s not Laurel, that Oliver is saving, it’s Felicity. The sparks between Felicity and Oliver are continuing to peak, not to mention the fact that he is well aware of her interest in him and vice versa, he may not admit it, but feelings for Felicity are indeed brewing. I’m guessing perhaps around February or May sweeps the colleagues will give into temptation. The fact that Felicity apologized for forcing Oliver to kill again after he promised not to, did draw the two closer. Once ‘Arrow’ is down that dark path, nothing will be able to stop him, especially when it’s the people he cares about most, but back to the juicy stuff.

The final moments of the episode saw Moira enjoying her freedom after a not guilty verdict was found by the jurors. Oliver was surprised by the verdict the most, as he was certain his mother would be found guilty; there was no way that she couldn’t. As she got into a limo to head home, the driver took her to a place unknown, which alarmed her and the audience to say the least.  At their destination, the driver received an arrow to the chest, we’re made to think its Oliver, but it’s Malcolm! The look on her face said wonders.  She was in utter shock and fear trembled through her body as she wondered how he was back from the dead.

He acknowledged that she needed his help and pulled strings so that the jury would return with a not guilty verdict, but that was not all. The biggest bombshell was the revelation that he is Thea Queens father! Oli’s enemy is the father to his little sis.  Good luck on trying to end Mr. Merlyn once and for all, the vigilante; it will not be an easy task. Hmm, I have an inkling that “The Dark Archer” and “The Arrow” will work alongside to take down an even greater threat this season.  “Arrow” airs Wednesdays at 8 p.m. on The CW.