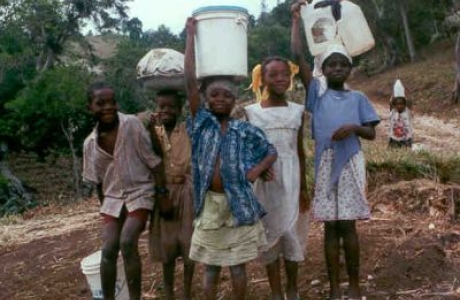 HOLLYWOOD —Exquisitely painful, it sparked off hundreds of emotions. Heartbreak is what we viewed in prime time, as well as dozens of television networks, Web sites and radio stations that broadcasted the “Hope For Haiti Now” telethon. For two hours, on January 22, A-list musicians ranging from Madonna to Beyonce performed songs of inspiration and sorrow in Los Angeles, New York and London studios. Without commercial breaks, no applause, no show-biz introductions, the artists seemed serious and the performances intense.

The stars came out. Mel Gibson, Jack Nicholson, Reese Witherspoon, Julia Roberts, Steven Spielberg and Ringo Starr answered phones, while CNN’s Anderson Cooper contributed reports directly from Haiti, documenting the devastation. Alicia Keys opened the show with her solo version of “Prelude to a Kiss,” while playing on the piano. Bruce Springsteen played the classic “We Shall Overcome,” a somber version, featuring three instruments (trumpet, guitar and accordion) and back-up gospel vocals. A slew of artists included Stevie Wonder, Madonna, Beyonce with Chris Martin of Coldplay, Sheryl Crow, Kid Rock and Keith Urban teamed up for “Lean On Me.” Other performers included Coldplay, Mary J. Blige, Taylor Swift, Justin Timberlake and Matt Morris, Jennifer Hudson and Sting. Wyclef Jean, who was born in Haiti, talked somberly about traveling to his country, after the January 12 earthquake, to pull his “friends from the rubble.”

Celebrities continue to fork over major donations for the relief effort. In the million-dollar mark there is Sandra Bullock, Leonardo DiCaprio, Angelina Jolie and Brad Pitt, who donated $1 million each. Adding to the roster is model Gisele Bundchen who gave $1.5 million. That’s not to mention the millions donated by people across the globe, as of press time. The telethon won’t be the last celebrity effort for Haiti, I’m sure; BET plans on holding its all-star telethon on February 5, with hosts Diddy and Queen Latifah. It is scheduled to be aired on MTV and VH1. This devastating earthquake that took the lives of more than 200,000 innocent people on January 12 has touched the hearts of millions worldwide. The entertainment world has responded with an outpouring of kindness and charity, from millions of dollar donations to dedicated songs designed to raise money for relief. The telethon raised more than $57 million, according to organizers.

Besides celebrities, soccer stars united on January 25, in Lisbon, Portugal in a friendly exhibition soccer match at the Stadium of Lights to raise funds in support of relief efforts in Haiti along with the United Nations Development Program. The benefit soccer match drew some heavy hitters, including Brazilian midfielder Kaka and retired soccer star/humanitarian Zinedine Zidane, both of whom are Goodwill Ambassadors of the UNDP. Missing from the exhibition game was Ronaldo due to his club commitments with his club Corinthians-FC on January 24; however, his friend and teammate Kaka took his place. You may remember Zidane, for his infamous head-butt he gave Marco Materazzi during the 2006 World Cup final between Italy and France. The friendly game between Zidane & Friends against the All-Star team of Benfica, tied 3-3.

Speaking of millions, the movie “Avatar” is just $2 million short of the highest grossing film ever, which is currently held by James Cameron’s 1997 epic Titanic. My suggestion still stands, about mortgaging your house, like I mentioned last week. At the Golden Globes a few weeks ago, it won the best movie prize at the awards while James Cameron was named best director. It also picked up eight BAFTA nominations, including film and best director. Amazingly, it didn’t win at the SAG Awards on January 23. And now it seems all eyes are on the Academy Award nominations with “Avatar” being tipped to be a front runner. The nominations for the Oscars this year will be announced on February 2.

Speaking of the SAG Awards, Brad Pitt was a no-show, where his film “Inglourious Basterds” won an award for best ensemble cast. However, he did show up for “Hope for Haiti Now telethon,” which was organized by his good buddy George Clooney, missing was his other half Angelina Jolie. His former wife though, Jennifer Aniston was helping out at the event raising money. Can someone please give Brad Pitt a mirror? What in the world is up with that scraggly gray beard?