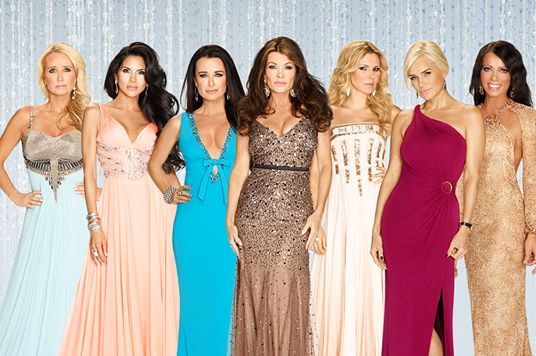 Last season was all about Miss America Kenya Moore who gave the other ladies a dose of realness.  I’ll admit it, without Moore, last season would have been a complete bore, so its no surprise that season six revolves around the ”˜say it like it is’ socialite mending fences. The original housewife NeNe Leakes relished in the happiness of being a newly married woman. Porsha grappled with the emotional rollercoaster of dealing with a divorce, from her husband Kordell. Cynthia found herself moving The Bailey Agency to a new location; in a space owned by her husband Peter. Hmmm, that does not seem like a good idea.  Mixing business with personal is never a good idea, and it’s something that will test their marriage again in my opinion.

Kenya whirled back into Atlanta still feuding with the other ladies; there have been plenty of conflicts in the past months that must be fixed.  Phaedra was pulling double duty with being a new mom, working as a lawyer and renovating a brand new house.  Kandi was fighting the heartbreak of planning a marriage without her mother’s approval. To see the aftermath of Porsha’s marriage fall apart was a sad, sad moment in the episode. The emotions unleashed by this housewife and her family during this devastating time, were authentic.  Questions of her husband’s sexuality came to the forefront, similar to rumors that surfaced last season with Walter, Kenya’s former flame; it was a bit ironic to say the least.

There was a bit of disassociation between Kenya, Phaedra and NeNe.  The audience is well aware that Phaedra and Kenya will never be buddies, but to see NeNe and Kenya feud about each other not ”˜being’ there for one another was ridiculous. It was the fact that certain people were invited to NeNe’s wedding and she gave a harsh dose of reality to Ms. Moore.  Mrs. Leakes has definitely grown since season one; I never thought I’d see the day where NeNe would walk away from a confrontation. Kudos to her for being the bigger woman.

Back in “ Beverly Hills” it’s a new forefront of faces.  No longer on the show are Camille Grammar, Taylor Armstrong or Adrienne Maloof. So that leaves us with series regulars Lisa Vanderpump, Kyle Richards and Kim Richards. Also back for more cat fights are Brandi Glanville and Yolanda Foster, as well as new additions Joyce Giraurd de Ohoven and Carlton Gebbia. It was a surprise to see the episode open with the focus on Yolanda, who in my opinion was a bit M.I.A. last season; this season it appears she’ll be front and center in the drama involving her daughter, Gigi and a health crisis. It was indeed a treat to see the rehearsals of “BH” housewife Lisa, as she competed on “Dancing with the Stars;” unfortunately we already know she didn’t make it to the end.

Kyle discovered the harsh reality that comes with running a business; it looks fun in the beginning, but tons of work has to be done day in and day out. It appears the relationship between Kyle and Lisa is quite strained, while it looks like Brandi has found a new friend in Yolanda? Whoa, that’s a quick turnaround, what happened to BFF Lisa? Could there be trouble in paradise? Lisa sparked a nerve with Kyle about rumors that her hubby has been cheating and to make it a joke in front of Mauricio and her child was awkward to say the least. Kim had her hands full with Kingsley, a dog that gets into more trouble than Kim can handle.

Boss lady Lisa had her hands full with her staff from Sur who hosted Kyle’s event. I will admit I was not a fan of the crossover event between “Real Housewives of Beverly Hills” and “Vanderpump Rules.” It appears the later needed a bit of a boost, whereas the ladies of “BH” not so much.  Well, well to hear Kyle say Lisa is a bit intimated by Yolanda was a huge QUESTION MARK? Lisa afraid of another housewife, I don’t think so.  These two ladies need to bury the hatchet; they use to be great friends, but things have so changed over that past three seasons.

The newest housewife with a bit of fire Carlton built a bit of a friendship with Lisa; they’re both British. There was a division between the groups, Brandi, Lisa and Yolanda in one clique, Kyle, Kim and Carlton in the other clique. Brandi also got acquainted with newest “BH” alum Joyce, Miss Puerto Rico.  It appears Joyce and Kyle really clicked, and new BFF’s have been formed.  The tension between Yolanda and Kyle is indeed reaching a fever pitch, and will likely come to a head before the season wraps. I will admit that Carlton does have that undercutting sense of humor, similar to Lisa, but it looks like Joyce and Carlton won’t be best buddies this season.