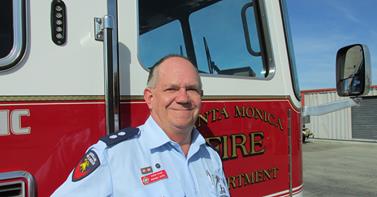 SANTA MONICA-The Santa Monica Fire Department has announced that Station Officer, Michael Yates, from the Queensland Fire and Emergency Services Australia, will be participating in a fellowship with the department beginning in May.

A press release from SMFD states that Officer Yates is “currently serving as Recruit Course Coordinator with the Queensland combined Emergency Services Academy in Brisbane Queensland” and he has “served in stations in the far North West and the Sunshine coast of Queensland Australia as a firefighter and then a junior officer before commencing as a trainer at the academy. He is now the senior instructor and holds competences as a heavy vehicle driver trainer, road crash rescue instructor, electrical de-energizing instructor as well as full competencies in all facets of basic firefighter training.”

The fellowship that Officer Yates is involved in “is an internationally competitive, merit-based scholarship provided by the Australian Government that supports citizens from eligible countries to undertake study, research and professional development in Australia, and for Australians to undertake these programs overseas. The program provides various study and professional opportunities” states the release.

Officer Yates has expressed his thanks and gratitude to those who will be hosting him, including the Crown Plaza Hotel LAX in Los Angeles. The press release informs us that he “looks forward to his tenure here in Santa Monica and the surrounding communities.”