UNITED STATES—Members of the President Elect Joe Biden met with National Security officials to increase security for the Presidential inauguration on Wednesday, January 20. Security efforts come close to a week after approximately five dozen National Guards were deployed to the U.S. Capitol by the Trump administration after the riot on January 6. An additional 20,000 troops were brought in.

Biden has been briefed by law enforcement, and federal agents including the FBI, and Secret Service.

Washington D.C. Mayor Muriel Bowser has  voiced her concerns over the possibility of an inauguration discussing “continued threats.”

FBI Director, Christopher Wray forewarned authorities on Thursday, January 14, that the FBI was, “Seeing and an extensive amount of concerning online chatter,” and are monitoring calls for the “potential [of] armed protests.”

According to reports, the FBI were in contact during a phone conference with police chiefs across the country about threats of violence in all 50 states calling on law enforcement to be on high alert for activity from extremists.

Biden’s team canceled their planned Amtrak trip from Delaware to D.C. on the day of inauguration due to threats of violence. 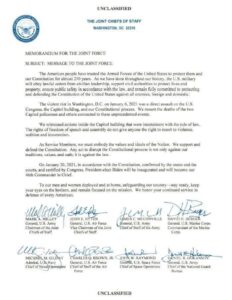 Close to 90 of those deployed are from Troop B, 102nd Cavalry Regiment including 90 from West Orange, 90 from Mount Holly, and 100 from Blackwood, New Jersey.

The rest came from the 508th Military Police Company in Teaneck and airmen from the 108th Wing and 177th Fighter Wing in Egg Harbor Township leaving on January 10.

The National Guard is expected to have a presence at the U.S. Capitol through January 20. Security fencing is in place around the Capitol.

The Department of Defense (DOD) reported in a telephone briefing on January 7, that once the reality of the assault on the U.S. Capitol became apparent, National Guard troops responded appropriately.

“Yesterday [January 6] was a horrible and shameful day here at the U.S. Capitol and the Nation at large. The District of Columbia asked the Army for help and our National Guard responded,” said Army Secretary Ryan McCarthy.