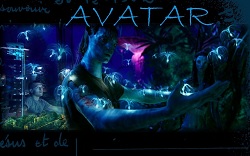 BEVERLY HILLS—James Cameron’s epic “Avatar” took the top prize for Best Motion Picture-Drama at the 67th annual Golden Globe Awards last night, beating out perennial favorites “The Hurt Locker” and “Precious: Based on the novel Push by Sapphire.” So does this mean that “The Hurt Locker” and “Precious” are unlikely contenders? That will be determined on Saturday night, when the Screen Actor’s Guild Awards are announced. Both films are vying for the Best Acting Ensemble Award so whoever wins is likely to give “Avatar” tough competition at the Oscars.

Comedian Ricky Gervais delivered quite a few laughs during the show while taking shots at actors, even making a quick joke about Mel Gibson before he appeared on stage. Best Supporting Actress-Motion Picture went to a deserving Mo’Nique for her riveting role as Mary Jones in the film “Precious.” The usually funny comedian delivered a heartfelt acceptance speech at the podium as she thanked her husband, co-star Gabourey Sidibe and gave praise to the film’s director Lee Daniels. For Best Supporting Actor, the award went to Christoph Waltz for his sensational turn in Quentin Taratino’s “Inglourious Basterds.” Both Waltz and Mo’Nique are locks for Oscar nominations as well as wins.

Meryl Streep won for Best Actress-Musical/Comedy for her role as Julia Child in “Julie and Julia.” She gave kudos to her mother during her speech, while proclaiming her love to be able to do a job that she enjoys.  Best Actor-Musical/Comedy went to a shocked Robert Downey Jr. for “Sherlock Homes.”  He joked while accepting his award, poking fun at his wife and the film “Avatar.” “First of all, I want to thank Susan Downey, who told me that Matt Damon was going to win so don’t bother to prepare a speech,” said Robert Downey Jr.

In one of the toughest categories of the night, Best Actress-Drama, a very gracious Sandra Bullock, also nominated in the Best-Actress Musical/Comedy for “The Proposal,” accepted the award for her terrific turn as Leigh Anne Tuohy in “The Blind Side.” She thanked her husband Jesse James and also reiterated the importance of helping the victims of the tragic earthquake in Haiti. Bullock now looks like the front-runner in this year’s Oscar race, but don’t count out Carey Mulligan “An Education” and Gabourey Sidibe “Precious” who can change the entire dynamic if they’re winners at the 16th Screen Actors Guild Awards.

While many expected George Clooney to win Best Actor-Drama for his sensational role in Jason Reitman’s “Up in the Air,” Jeff Bridges won for “Crazy Heart.” Bridges got a standing ovation from the audience as he accepted his award. He now has momentum going into the SAG awards, but Clooney shouldn’t be counted out, not to mention Jeremy Renner for his captivating performance in “The Hurt Locker.” Renner delivers a performance that is likely to strike a cord with Oscar voters.

On the television side, Best Actress and Best Actor in a Comedy series went to Toni Collette for “The United States of Tara” and Alec Baldwin for “30 Rock.” In a joyous moment, the hit series “Glee” won for Best Comedy Series and it was well deserved. On the drama side, Best Actor and Best Actress awards went to Michael C. Hall “Dexter” and Juliana Margulies “The Good Wife.” “Mad Men” reigned supreme in the Best Drama series category, beating out fan-favorite “True Blood.” Another emotional moment during the show occurred when Drew Barrymore accepted the award for Best Actress in a mini-series or motion picture made for television for “Grey Gardens.” She was consumed with joy and nerves on stage.

The Golden Globes are a huge predictor of likely nominees and winners for the Academy Award, but there are always surprises with Oscar nominations. Unlike the Academy Awards, the winners of the Golden Globe are determined by the Hollywood Foreign Press Association. As for the acting race, expect a surprise or two to pop up on the Best Actress and Best Actor (Jeremy Renner) ballots and as for Best Director, Lee Daniels may be the dark horse in that race for his film “Precious.” See if I’m right when the nominees are announced on Tuesday, February 2. Join us next year for the 68th annual Golden Globe Awards!