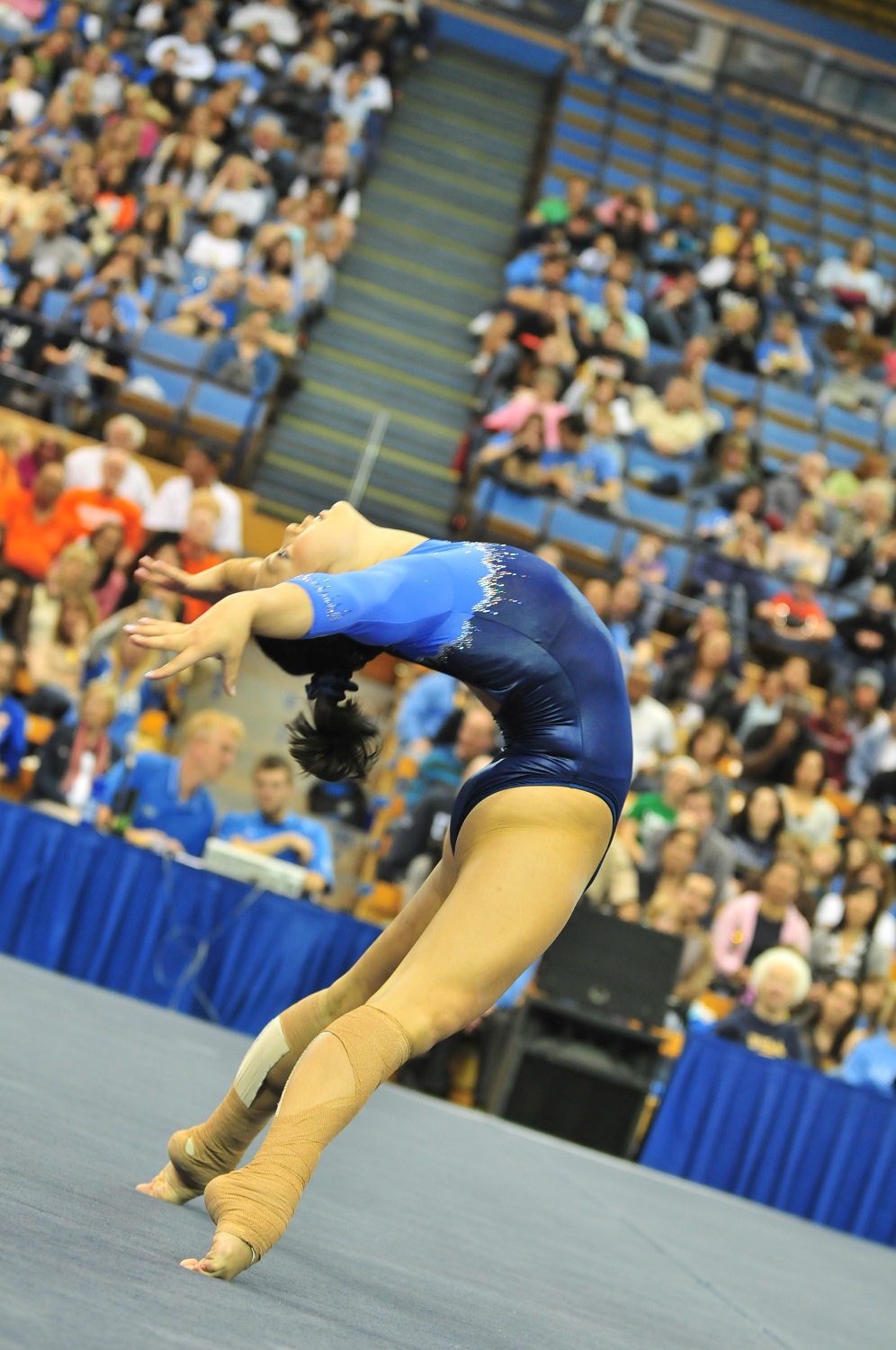 WESTWOOD—After suffering a close loss to Stanford the previous week, a team who they had already lost too once, the ninth ranked UCLA Gymnastics team was looking to bounce back in big way against the third ranked Oregon State Beavers last Sunday.

The Beavers came into the meet undefeated and fresh off a season high score of 196.725 against Arizona in Corvallis. For the Bruins the story was a little different. In their last four meets they had a mediocre record of 2-2, with both losses coming against Stanford. Throughout those four meets the Bruins began to experience a lot of trouble in their floor and beam events. Missteps and falls lead to low scores and drop in their average score which dropped them to ninth in the national rankings.

Despite all the problems coming into last Sunday’s meet the Bruins remained confident in their abilities and came out strong in the first rotation. All six gymnasts competing in the vault all posted a score of 9.8 or better in route to a finishing score of 49.375 that gave them the lead after the first rotation. The performance on vault was highlighted by Brittani McCullough who tallied a 9.9 and Vanessa Zamarippa with a score of 9.925 to lead the team, Zamarippa was just getting started. In the second rotation the Bruins continued their dominance on uneven bars, lead once again by sophomore sensation Vanessa Zamarippa with a score of 9.925. Senior Anna Li also posted a score of 9.925 to allow the team to finish another rotation with a score of 49.3. Oregon State finished with a solid mark of 49.075 on vault during the second rotation, but were unable to make much of a dent in UCLA’s lead heading into the third rotation.

Heading into the third rotation the demeanor of the crowd began to dial down a bit. Everyone knew how much trouble the beam had been giving the Bruins the last couple meets and they were unsure how things would play out this time in a meet with even more pressure. Through all the excitement of the first two rotations, if the Bruins couldn’t get it done on beam it would open the door for the Beavers to get right back into meet. No one was more aware of her squad’s struggles than head coach Valerie Kondos-Fields, so she decided to shake things up. Instead of starting with her lowest scoring performers, Kondos-Fields put her best foot forward and started the rotation off with Anna Li and Elyse Hopfner-Hibbs. It proved to be the right move because after both Li and Hopfner-Hibbs started things off with consecutive 9.85s, the rest of the team fell in line. Zamarippa once again lead the team with a 9.875, Aisha Gerber notched another 9.85, and despite a fall by Lichelle Wong, Mizuki Sato followed her up with a career high 9.85 to save the rotation for the Bruins.

UCLA had a comfortable lead going into the final rotation, but floor had also been a source of inconsistency for the Bruins the past few weeks. It was their meet to lose and the Bruins did everything they could in the last rotation to make sure they didn’t end up with the short straw for the second straight meet. Tauny Frattone, who was returning from an injury, lead off with a 9.875 and set the bar for the rest of her team. Fortunately for all the thousands of fans that filled Pauley Pavilion that day, the rest of the team made sure they reached that bar or went over it. With one exciting performance after another the Bruins entertained the crowd with their high flying acrobatics and amazing dance moves. They finished the fourth and final rotation with a season high 49.475 on floor and no Bruin finished with a score below 9.875, once again lead by Zamarippa with a score of 9.95.

The stunning performance by the Bruins handed the Beavers their first loss of the season and gave UCLA a season high score of 197.375, the highest score for the UCLA Gymnastics team in the last five years. Zamarippa’s individual efforts earned her the Pac-10 Gymnast of the week award for the second week in a row. With two more meets before the Pac-10 Championships, the Bruins plan on continuing their strong performances and taking steps towards their ultimate goal of a National Championship.