BEVERLY HILLS—Officials with the Beverly Hills Police Department are seeking the public’s assistance in the identification of three robbery suspects.

The crime occurred on April 23, on the 9800 block of Wilshire Boulevard in Beverly Hills. The suspects followed the victim into a building at approximately 7:00 p.m. The victim was unaware that the three men were following him into the building. The first suspect was armed with a handgun and pointed the weapon at the victim demanding property. The victim was able to distract the three suspects who eventually fled without obtaining any of his property. 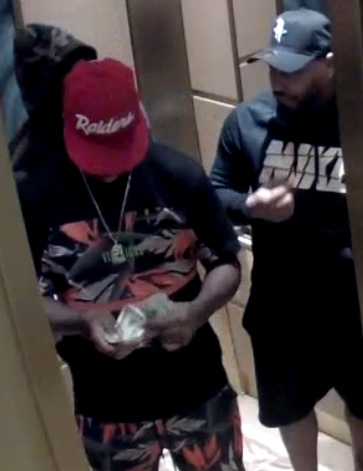 The suspects were caught on surveillance footage running down the building’s stairwell and fled the scene in a newer model white Ford Explorer that did not contain license plates. The vehicle used to flee the scene of the robbery was driven by a fourth suspect who was not identifiable at this time.

The first suspect is described as an African American male between the ages of 20 and 30. He has a medium build and was wearing a matching black T-shirt and shorts ensemble with a unique pink and white design. He was wearing a red baseball cap with a Raiders logo on it, black socks, and white Gucci slide sandals. The first suspect was also wearing a distinctive gold necklace and has a tattoo on the back on his neck that looks like two letter M’s. The suspect may be left handed.

The second suspect is described as an African American male between the ages of 20 and 30 years old. He has a medium build with a full beard and was wearing black Nike shorts and a black Nike sweatshirt. The second suspect was also wearing a black Houston Rockets baseball cap that had the teams logo embroidered in white.

The third suspect is described as an African American male between the ages of 20 and 30 years old. He was wearing a green camouflage matching sweat suit, green undershorts, and red athletic shoes.

Investigators believe that the robbery suspects may be affiliated with the California Bay area and/or the Houston, Texas region.

Lieutenant Elizabeth Albanese of the Beverly Hills Police Department informed Canyon News that there were no other victims in the incident. She added that officials do not have any new information at this time that would reveal if the crime was gang related or not.

Anyone with details regarding this case is asked to contact the Beverly Hills Police Department’s Detective Bureau at (310) 285-2158. Anonymous tips can be made by texting BEVHILLSPD followed by the tip information to 888777.