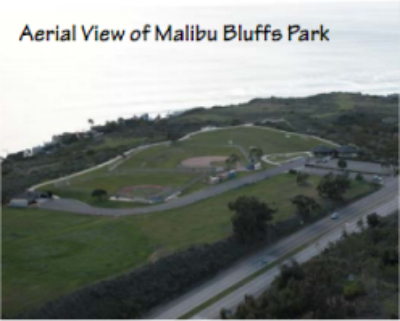 MALIBU—On Monday, January 23, the Malibu City Council voted unanimously to invite firms to place bids of up to $40,000 each to design a new skateboard park at Malibu Bluffs Park to replace Papa Jack’s Skate Park, which was closed in 2011.

It is estimated that whichever design firm is ultimately chosen will return in June to consult the council on proposed conceptual and schematic designs, grading and drainage plans, final construction documents, specifications and community input. The council weighed a simpler option for which $7,000 would have been made available for a firm to develop a conceptual design and hold community meetings by April.

During the public comment portion of the meeting, a number of locals voiced their opposition to the skateboard park’s proposed Bluffs Park location. They specifically took issue with increased parking problems that could be created if parents of skateboarders compete with parents of soccer and little league players for spaces.

Claiming that no other locations were explored, they instead suggested Trancas Canyon Park or a Malibu Gardens Center-adjacent parking lot for the park. They asked the council to take the appropriate amount of time and not set a deadline in finding an appropriate alternative.

But the Malibu Skate Park Committee deemed the parking lot in the southwest portion of Bluffs Park as the most feasible location after exploring other locations that proved to be inadequate. Because parking there is an ongoing issue, especially during the baseball and soccer seasons, city staff is currently negotiating with the adjacent land’s owner to buy the property to use for additional spaces.

Councilmember Pamela Conley Ulich reminded those against the proposed site that the council previously gave the Malibu Township Council the authority to decide what goes on at Trancas Canyon Park, which is why it was ruled out as an option.

Kristina Kell, who is a member of the skate park committee, said most local groups she contacted to get their feedback are supportive of the skateboard park. And Bluffs Park sports groups and associations for homeowners who live nearby want to wait to see the plans before they weigh in.

Yet others wanted to know why the park could not instead be located behind city hall or why its supporters could not instead raise enough money to buy their own property on which to build it. Kell said their opposition without seeing plans seems based on the stigma of seeing skateboarders as troublemakers.

Malibu lost its skateboard park in late 2011, when the city’s lease expired for the land on which Papa Jack’s Skate Park stood. Steve Soboroff, the owner, did not want to renew the lease because the park was located in a commercial area on which he instead wanted to develop a Whole Foods store and four food service buildings.

Soboroff offered to donate $25,000 toward its relocation and $5,000 has been privately raised. The plan is to use this money and city funds to pay for the park.

Ten thousand dollars was previously allocated by the council to have Papa Jack’s Skate Park ramps moved to Bluffs Park for kids to use while a more permanent one is in development. City Manager Jim Thorsen estimated that the temporary park would take 45 days to put into place and the permanent park could take anywhere between 15 months to two years.