Biden signed a Delegation of Authority under section 506 (a)(1) of the Foreign Assistance Act (FAA) of 1961 allotting authority to the U.S. Secretary of State, Anthony J. Blinken to allow a drawdown of up to but not exceeding $200 million in defense articles, services, military education and training of the Department of Defense. 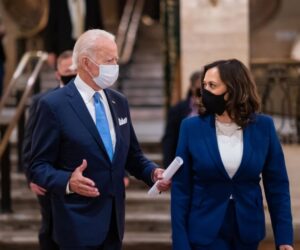 Biden defended his choice not to supply weapons to Ukraine, while attending an assembly meeting in Philadelphia.

“The idea…that we are going to send in offensive equipment and have planes…and tanks, and trains going in with American pilots and American crews…just understand. Don’t kid yourself. No matter what y’all say, that’s called World War III.”

On February 25, the POTUS made statements on the NATO Summit and Call with Ukraine President Zelensky that read:

“Immediately after the NATO Summit, I spoke with President Zelenskyy of Ukraine. I commended the brave actions of the Ukrainian people who were fighting to defend their country. I also conveyed ongoing economic, humanitarian, and security support is provided by the United States as well as our continued efforts to rally other countries to provide similar assistance.”

On February 24, Russian forces invaded Ukraine under the authority of Russian President Vladimir Putin. A Russian airstrike hit a maternity hospital in Ukraine killing mothers and newborns in an unprovoked attack.

Allies in Poland offered to make the transfer of U.S. fighter jets stored in Poland to Ukraine; a request denied by President Biden.