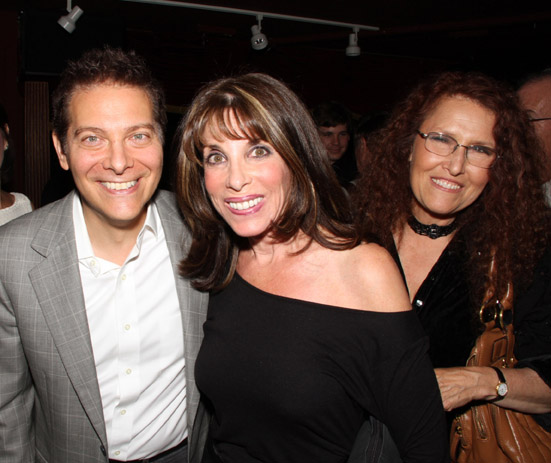 HOLLYWOOD—Jim Caruso and Billy Stritch have done it again. Cabaret at the Castle’s “Cast Party” offers Los Angeles theater lovers a taste of New York without the airfare or the high cost hotel accommodations. Celebrities, talent and cocktails ”¦ often all at the same time ”¦ in an intimate nightclub setting gives patrons the Big Apple sensation, without a big bite out of the wallet.
Add Tony-winners with a dash of American Idol reps and sprinkle with YouTube talent. Then co-mingle to create a must-taste concoction with a touch of magic for desert. The recipe by Jim Caruso and Billy Stritch has been around for years but only recently shared outside of its New York kitchen.
Among the talents on the roster were John Lloyd Young, Daisy Eagan, The Tonics, Chad Doreck, Sally Kellerman, Cybill Shepherd, Tiffany, Michael Orland (“American Idol”), Erich Bergen, Julie Garnye, Bernardo Depaula, Ilene Graff, Cortez Alexander, Lindon Warren, Miranda Sings (aka Colleen Ballinger), Melissa Manchester (who introduced and performed with daughter Hannah Manchester), and “Three Men and a Baby”…Grand! In true Magic Castle style there was the genius of illusionist Andrew Goldenhersh, who left audience members whispering “How?” as he seemed to create both butterflies and chickens out of thin air. Audience members were just as stellar with Michael Feinstein, Kate Linder and Kim Rhodes, among others.
Although “Cast Party” will always be a New York tradition, it is fast becoming a Los Angeles must see.