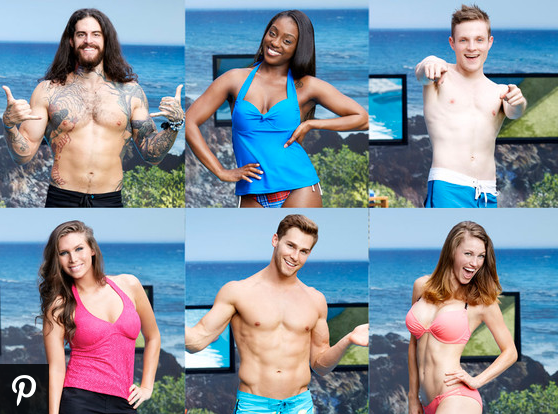 HOLLYWOOD—Being an avid “Big Brother” fan, we’re going to take a close look each week at all the ins and outs of season 17. Note: SPOILERS will be evident in my recaps so be aware if you haven’t watched episodes or the live feeds. I had high hopes of the BB Takeover, but my concern is the Battle of Block competition. It makes it that much more difficult for strategizing in my opinion and the fact that people are actually throwing competitions makes me sick to my stomach. A true player of the game would never do such a thing.

This is the problems with having fans of the show, super fans and recruits. If you ask me, recruits are all about eye-candy and they make for terrible TV and gameplay. I have no INTENT on discussing every player in the game each week, only those who are relevant or those that I see as legitimate threats.

So Jace Agolli was the first to exit the compound, which was expected. The surprise in Thursday’s episode is that CBS didn’t include the massive blow-up that occurred earlier in the week between Da’Vonne and Audrey, they decided to show that fall-out in Sunday’s episode.

I’ve gone back and forth for years about the theory that the show could be rigged. Yeah, I’d argue in “BB 13” Rachel and Jordan should have been goners when Porsche won HOH and suddenly a Pandora’s Box appeared bringing the duo twist back to the game. The same argument goes for the Team America twist from “BB 16.” Trust me if Donny, Derrick and Frankie weren’t ‘working’ together, the game would have totally played out much differently.

Sorry to digress, true diehards know the FEEDS and the CBS show are two different things. The shows are edited to portray certain people in positive and negative lights; the FEEDS give fans the truth in my opinion. You sometimes get to see sides of characters that are not always evident on the episodes that air on TV. If we were going for pure entertainment, there are 3 characters that immediately rise to the top: Jason, Da’Vonne or Day as she likes to be called and John aka Johnny Mac. Why, their confessionals are blunt, direct and seem like they’re being the most honest and direct with viewers about what is really going on.

If I had to pick 3 that falls to the bottom, it would be: Austin, Clay and Jackie. Austin plays on this duplicitous personality, yet it has not surfaced, Clay is just bland beyond bland, and Jackie is almost non-existent at times.

This week saw the surprise with both Becky and Shelli winning HOH. Shelli is playing a bad game in my opinion by making it clear as day she and Clay are a duo. Hello, its only week two and everyone knows you are in cahoots, what’s worse is you’re not hiding it. Even if people are telling you that you’re not a target, you are, you just won’t know it till it’s too late. These two have been shackled in the HOH like king and queen, and have alienated a few houseguests while others play kiss ***. Sorry I know it’s a game, but sometimes your dignity is worth so much more than money. Shelli has already proven to not be loyal to the house this week, which means she could likely be exiting the canvas in the next week or so.

Becky nominated Steve and Jason with the intention of taking out Audrey. Yes, at first I liked Audrey, but she has proven to be the worse player ever, worse than Devin from last year. Shelli nominated Da’Vonne and John. Her target is Da’Vonne and we all know why: Clay. Those two had a blow-up last week and Clay and Shelli for the life of me can’t get over it.

Da’Vonne is an emotional player, her problem is that house meetings are never a great solution. Never add gasoline to a fire, it just makes it more explosive. If you truly want to cause a scene do so when it matters, like at the eviction ceremony or power of veto ceremony. I still can’t believe the houseguests haven’t learned anything from watching Dan in season 10 of the series. The POV roulette game he played was fantastic; put people in the hot seat and let the truth bleed/explode in ways you can only imagine. This allows alliances to be revealed and people’s true motives to come into question.

The biggest issue I’ve noticed with these new houseguests is the number of alliances and hard gameplay I’ve seen in just 2 weeks. People, alliances never make it to the end. Loyalty can remain to only 1 person: yourself. If anything, you do have to play the game with another person, but at most I would say 3-4 people in an alliance is the best. The bigger the alliance the quicker it will crumble, look at “BB 16” for anyone who thinks I’m lying.

If I had to base things on strategic play, two players who I’m rooting for include Vanessa and Becky. People are seriously underestimating Becky and they shouldn’t. She’s quiet; she’s athletic and hasn’t caused any drama in the house. She’s not completely under the radar. She socializes well and she talks only when she needs to. Loose lips sink ships. Vanessa is a strategist, she has aligned herself well with Austin who could be a strong ally, but the problem is they have aligned with Liz, Jeff, Shelli and Clay. Clay talks too much; anything Vanessa tells Austin will get back to Clay and so on. She needs to use Austin to get information, but never divulge her true intentions to him. Austin is a character that is big talk, but no bite at the moment.

Jeff is another double agent. He has good relations with everyone in the house, but spills the details to anyone who will listen. This raises questions about his loyalty and allegiance in the house. Players whose true motives that have yet to be revealed include: Meg, James, Liz and Steve. The twin twist is not really intriguing in my opinion. By the time the twin joins the game if that happens, Liz and Julia will become automatic targets in my opinion. It happened in season five, and if they really wanted to amplify the twist, have multiple houseguests’ play the game with twins and the person who wins the most comps or something along those lines gets to join the game.

Johnny Mac saved himself from eviction by winning the POV, but he also threw the BOB competition. Johnny is playing a dangerous game in my opinion and should be careful who he aligns with. He is well-liked in the house, but if word begins to surface to the other side that his is floating to power, it will impact his gameplay. Shelli made more enemies during her HOH reign than she realized. First, she did not go after someone that the house wanted gone (Audrey), than going back on her word to Meg and Liz regarding nominations. Never tell someone you are planning to nominate them and then backtrack to not get them nominated. Yep, Liz was probably a goner this week, but I had a feeling production intervened to save this twin twist which will not be great TV if you ask.

Kathy Griffin’s BB takeover could prove interesting as one houseguest will get the opportunity to nullify votes from 3 houseguests this week. Could it change the eviction yes, but a better twist would be to prevent 3 players from competing in the next POV or HOH ceremony. That twist is a game-changer in my opinion; who knows we might see that in play far sooner than we expect.

If I had my pick of those who will go far just by analysis for week two it would include: Jason, Vanessa, Johnny Mac and Becky. Jason is a sleeper simply because his social game is amazing, and he has proven he might be small, but his vast knowledge of Big Brother gives him ample strategic moves and he can win competitions. The same applies for Johnny Mac; he just needs to be careful with who he aligns. He seems a bit out of the loop regarding the game at times which is never a good sign. To be honest if these four aligned they could be unstoppable in the game if you ask me.

Da’Vonne and Meg remain on the block and it looks like Da’Vonne’s goose is cooked. It’s unfortunate because she might have been one of the most ENTERTAINING houseguests in the diary room in years. The viewers like good TV, here’s hoping we don’t have another “BB 16,” cause to be honest I checked out as soon as Donny got evicted. I mean Da’Vonne figured out that Liz is the TWIN! Now, if she can only find a way to use that information to her advantage to stay in the house. Crazier things have happened on BB, remember when Dan, implemented his funeral on BB14 to coast to the finale; a true strategist will always find a way out of a pickle.

It’s hard to root for people that you don’t like and season 17 has a lot of people that are already annoying as hell and we’re only two weeks into the game, but this could be the week that sets the division in the house. There is always something about week 2 that changes the game.