HOLLYWOOD—I cannot tell how happy I am as a fan of “Big Brother” we are finally getting our second ‘All-Stars’ season after 14 years. Yes, it has been 14 years since we saw the best of the best of the reality series, and trust me that season ranks in my top 3, played the game. What took the producers so long to do this again? I will never know, but I guess we can thank the pandemic and the horrid BB21 season for giving us this because the show absolutely wants to leave that season in the past and focus on this crop of top tier players. You might be asking me who they are and before Wednesday’s premiere episode, I could not tell you.

Why? We got a live cast reveal! Yes, a live cast reveal to learn one-by-one which players would be competing for the top prize and the title of a winner of ‘All-Stars 2.’ Yes, that is what I am coining it because it’s the second go around. This was a stacked cast with some fan favorites, some legends, some head scratchers and a surprise or two. I will admit overall I was thrilled with a lot of the old schoolers who are getting the chance to compete again. For starters, Janelle Pierzina people! This woman is the reason I have loved BB since season 6. That is my favorite season; a divided house where the power continued to shift from week to week and she was never afraid to speak her mind! She is a true all-star America.

We also got Daniele Donato, loved her in BB8 and BB13, Keesha Smith, I’ve been dying for her to return because she was amazing in BB10, and who can forget Keesha’s Birthday America. We have Kaysar Ridha, the guy who was Janelle’s closet ally in BB6 and BB7 people. There is season 10 runner up Memphis Garrett, the brains in BB11 Kevin Campbell, Ian Terry the winner of BB14 and surprise, the guy who developed The Brigade from BB12, Enzo Palumbo. Yes, BB14 is not really old school, but in my eyes it is. When it comes to new school players we have the entertaining Da’Vonne Rogers from BB17 and BB18, Bayleigh Dayton from BB20, Tyler Crispen, who should have won BB20, BB21 underdog and fan favorite Nicole Anthony, love her or hate her, BB16 and BB18 contestant Nicole Franzel, season 16 runner-up Cody Califiore and then there were some surprises.

I mean Christmas Abbott from BB19, what the hell is she doing here? She’s not an all-star she was in a cast LITERALLY the entire season and did nothing, but be Paul’s minion. Then we have David Alexander from BB21, who was a first boot. Yes, he was dealt a bad hand, but how can you define him an all-star when he barely got the opportunity to play the game America? I can’t understand that logic. However, it is what it is. You have no idea how great this season would have been if we got Dan Gheesling (one of the best to ever play), Derrick Levasseur from BB16, Dr. Will Kirby (the greatest of all time) and Danielle Reyes (a master manipulator from BB3 and BB7) apart of the cast. One can only dream. 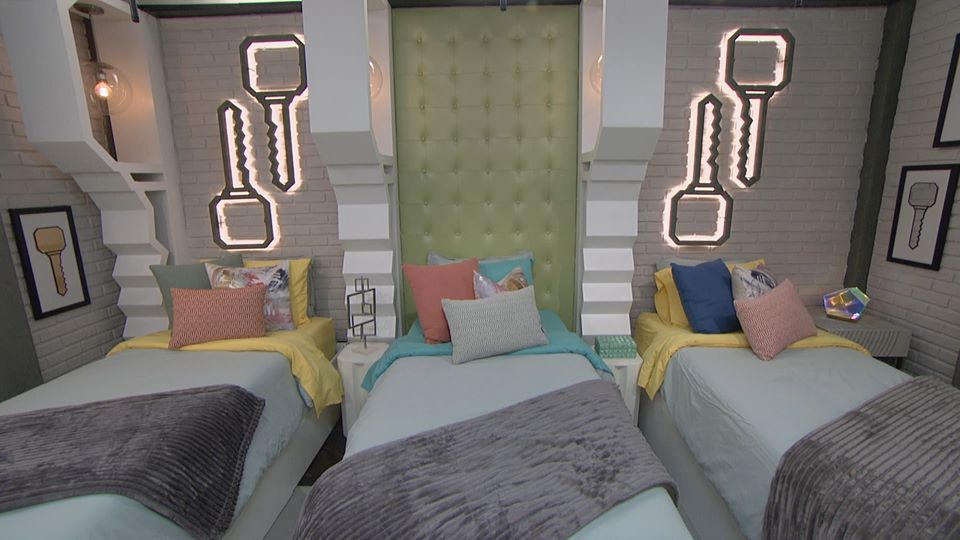 With that said this loaded 2-hour premiere delivered surprises, drama, clips from the past and an epic competition that changed the game and delivered twists. I mean come on its “All-Stars 2” America? As host Julie Chen states “Expect the Unexpected,” and we got it. I loved how the episode kicked off with the players entering in groups of four, with Julie noting twists and turns along the way. Daniele totally looks different people! This is the reason I love Da’Vonne, the girl knows how to entertain! Seeing the houseguests with masks all was stunning and Julie standing six feet apart.

Julie noted that only the first two finishers will advance to the live HOH comp. Trivia, finding the answer, using a game board to answer that question. So it seems from each group there will be two people, so a total of 8 people will compete in the final challenge. On this is so nerve-wrecking to watch America, Christmas was first to get the answer, while Nicole, Da’Vonne and Dani timed out. This was not a smart way to have a competition timed. Hmm, they will be hidden from the other houseguest till later in the night.

The next group of four was Tyler, Ian, Kevin and Enzo. I’m sorry Kevin is hilarious people! Ian per usual was slow and steady and locked in his answer first with Kevin followed in second place. So Julie is dropping all types of bombs noting that a new twist could keep two houseguests safe on eviction night. Our next four to compete:  Janelle, Bayleigh, Nicole A. and Keesha. Bayleigh and Janelle were literally right there, but it was Nicole A who managed to get her ball in their first and complete the puzzle. So our final group of competitors was Kaysar, Memphis, David and Cody. Yeah, the women seemed to have a tougher route to the end than the gentlemen.

Hmm, Memphis feels like he has a ton to prove and might have an axe to grind with Cody and being more cutthroat than ever before. Memphis was the first to finish followed by Cody. So Cody, Memphis, Christmas, Nicole A., Kevin and Ian will compete for the first HOH. Things not looking good for old school, so I’m hoping Memphis, Kevin or Ian pulls out this victory. I don’t want to see Cody or Christmas victory people. Now the all-stars actually see each other for the first time and oh, it was a ton of interesting dynamics. Memphis and Janelle that was fun people! Ian looked very nervous as did Nicole Franzel America. Kevin and Da’Vonne were so happy to see each other, as were Janelle and Keesha. Tyler did seem a bit nervous people.

Julie dropped some surprises for the new seasons, as she started questioning the houseguests. The one thing we know is that the first HOH is not an endurance competition, at least that’s what we think. It’s a race to run from one side to the other with stars, some solid others not so much. The person with the fastest time will become the first HOH. Then a twist, those eliminated will get to select an envelope some with goodies, others with out. Memphis is taking some hard falls. This is not about moving fast, it’s about taking one’s time. Looks like the small stars are the best option to use.

Cody was next, and he ran thru that course in record time like 21 seconds. Christmas timed out, and I don’t see anyone beating Cody’s time right now people. Nicole A, Kevin and Ian all fell short, and it leaves me wondering precisely who Cody is going to target as our first HOH, old school, new school or winners? Cody had a conversation with Julie where he revealed he was surprised to see Kaysar, nervous about his competition, so it makes us wonder who Cody has bonds with.

Julie then started to get to the good stuff people, a cash prize in the envelope and punishments. Four envelopes without cash, contain have not cards. Really, what a surprise people? So Christmas won $5,000, and Ian, Nicole, Kevin and Memphis are the first have nots of the week. Christmas winning that money might make her an easy target people. I can already see an alliance forming between Ian, Kevin and Nicole A. It looks like a furnace room people, the wonders of live TV people?

Time for another twist which involves new rooms that will twist the game unlike ever before; the first room for players to access will be the Safety Suite, which will save two houseguests. Oh, I hate a tease because I want to KNOW, I hate having to wait for answers people. “Big Brother: All-Stars” airs Sundays at 8 p.m. EST, Wednesdays at 8 p.m. EST and Thursdays at 8 p.m. EST. Just when I thought the summer staple was a no-go, the BB Gods blessed us, let the games begin people.