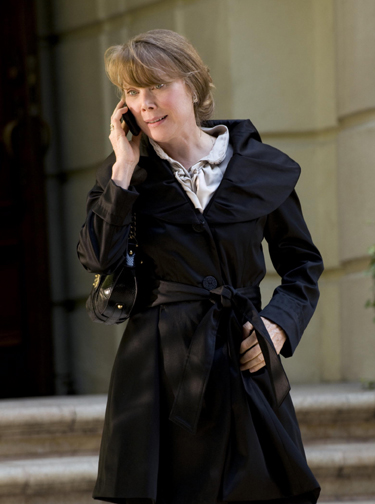 HOLLYWOOD —The “Big Love” episode on Sunday, February 28, titled “Next Ticket Out” had me glued to my chair. I’ll be the first to admit the J.J. character has me stumped. I can’t figure his secret out, and many fans of the series also felt the same way. The episode which was written by Patricia Breen and directed by David Knoller, is surely going to be discussed come Emmy season. It centered around Sarah (Amanda Seyfried), who shook up the family with an announcement, while Nicki makes an all-out attempt to be the woman Bill wants her to be. Shocking viewers and her family on the show.

Margene was put on the defensive when Bill questioned her real reasons for getting married. An ill-timed remark at a ladies-only event puts Barb in an unwanted spotlight. What I felt was a simple remark flew around the political circle as it does today and Barb’s comment may have been stupid; however, Bill paid a heavy price for it.

Marilyn played brilliantly by Oscar-winner Sissy Spacek looked to bring down Bill as his campaign winds down. Marilyn is one creepy and scary lady, whose legal tactics lend credence to why so many people hate lawyers. Her shake-down practices were unearthed by Bill and Barb, but the devious Washington lobbyist became almost unhinged by the end of the episode and Sissy Spacek plays psycho like no other.

Barb jolted Nicki with news about Joey that Bill was supposed to deliver. Learning that Billy’s brother Joey was in fact the murderer of her brother was something that sent Nicki spiraling out of control further. While a suspicious Bill looked for clues about J.J. (Zeljko Ivanek) in Kansas, while Adaleen finds them closer to home. Whatever Adaleen found, we’re sure to find out what it all means next week during the season finale. I’ll be at the Oscars, so guess I’ll have to TVO it?

While many of the devoted fans who are on the official Facebook page at facebook.com/biglove could hardly contain their excitement at tonight’s suspenseful episode. Mary Bowman Golden stated, “Wow! That’s all I can think to say. I wasn’t happy with the writers this year, but after tonight’s show, wow!” Elena Coppola-Graziano expressed many of my feelings, when she wrote “What is with the J.J. storyline? What did he do? Why isn’t Wanda talking? Did I miss something? Help!” No Elena, I suspect next week we’ll get the reveal we are both desperate for. “I think Barb and Indian Tommy are going to hook-up. He has feelings for her, it’s growing don’t cha think? [Sic]” Yes, I think Kile is correct. I also agree with Lynise Mills who concluded “HBO! Big Love”¦countdown for next Sunday starts now!”