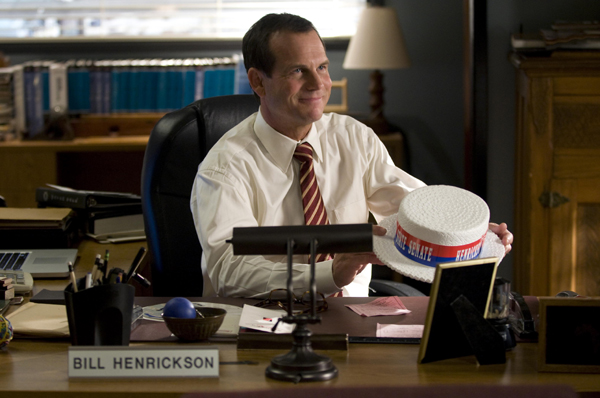 HOLLYWOOD —“Big Love’s” Sunday night episode was titled “Blood Atonement.” Not until the final frame of the show did I fully understand the title and all that it meant symbolically and spiritually. The creative genius of the writer Julia Cho came flooding through in perhaps the best episode of the season, with only two more episodes left. The episode was directed by David Petrarca, who mastered the impact of fast moving storylines that were fluid in their agility and pace. It was an amazing ride that fans could not stop raving about. Fan Ilich Ramirez summed it up best, “Holy Moly!!!”

From there I’ll say the storyline was impeccably well crafted. With a revenge-minded Joey played by Shawn Doyle in tow, Bill made an emergency trip to Mexico after his parents Lois and Frank’s latest smuggling escapade backfires. Nicki is jolted by a doctor’s news, but even more flummoxed by Adaleen’s [Mary Kay Place] shocking revelation. The post 60-year-old woman is now claiming she’s pregnant after consummating her marriage to J.J.

Margene offered up a novel remedy to keep Ana from leaving the country with her fiancÃ©. It was to marry Ana’s fiancÃ© whom is not an American citizen, but has been in the country completing medical school. The marriage was Margene’s way of atoning for having kissed Bill’s son Ben and angering Barb and causing such problems in the family.

After a scare at the casino, Barb [Jeanne Tripplehorn] and Tommy look for culprits ”“ and find some disturbing answers. It seems that Marilyn, played by Oscar-winner Sissy Spacek, may be behind all their problems with the right-wing Evangelicals who call their casino ungodly and wicked.

Throughout all the undertones and stories being played out so brilliantly by superb actors on the series the major plot line with Bill’s trip to Mexico to save his father, mother and son Ben from Hollis, who Joey was also prepared to murder for an atonement of a loved ones death. Hollis is the patriarch of a rival polygamist sect that has relocated to Mexico. When he and Bill finally faced off and Bill was willing to die for his son, just out of the horror Bill’s mother Lois used a machete to finally do what she was unable to do decades earlier. Lois protected her son Bill and used the machete to cut off Hollis’s arm. In the aftermath Bill was able to bring his son Ben home to Barb and the rest of the family. Though his election for the state senate is now in jeopardy after his mysterious disappearance during the campaign.

What was not mysterious was the impact and reaction this unforgettable episode of “Big Love” had on its viewers. Peggy Spray stated on the official “Big Love” Facebook page, “WOW…….Bill redeemed himself! And Lois pure psycho magic [sic].” While Rochelle Ball concurred about the scene with Lois defending Bill finally. “Tonight’s best part was the cutting off of Hollis arm. KUDOS to LOIS!!! [sic]” “There is nothing like a mother’s love,” said Keisha Lewis-Joseph. Sheryl Prather stated, “I need another hour. JJ? Gorin & Margene and Ana??? Whopper Chopper Dicing Lois??? I have Big love for Big Love!! [sic]” Amy Adamson Doan chimed in with, “That was by far the best episode of the season. I need to watch it again. Way too much happened.” “Big Love” was filled with passion, suspense and excitement. With the season ending in just two weeks, fans are excited about what they are seeing. I’m personally looking forward to Bill confronting Marilyn and seeing where Sissy Spacek takes her slick attorney image in the storyline. We all know there is going to be a big shocker for the season finale and count me in with the millions of other HBO viewers who can’t get enough of the series. Join us at Facebook | Big Love where we celebrate every Sunday night’s episode.

Evacuation Orders In Place For Soledad Fire In Santa Clarita