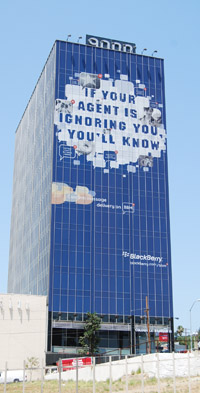 WEST HOLLYWOOD—An initiative to place new tax regulations on billboards and other advertising devices in West Hollywood was passed by the city council on Monday, October 25, for inclusion in the March 2011 ballot. Proponents of the new tax law say that the measure will help generate money for civil services in West Hollywood, which currently receives only about $1,500 in tax revenue per $1 million of gross advertising sales.

If passed, the law would put a 7 percent excise tax on advertising revenue from the lease of billboards, video signs and tall wall supergraphics. This would effectively increase the amount of tax revenue the city receives to $70,000 per $1 million dollars on advertising revenues from sales. The money generated would go to the general fund for city services, which includes park maintenance, sheriff services and enhancements for the new library.

Mike McNeilly, a representative from the advocate website TaxBillboardAct.com, states that all the advertising companies the website has spoken to about the measure believe the tax is fair. McNeilly also says that the “vast majority” of citizens in West Hollywood support the initiative, according to a survey.

The city of West Hollywood has been called the “sign capital of California” for its numerous signs that fill its skylines. The city encourages creativity in public advertising while also maintaining strict standards about compatibility with building architecture and neighborhood surroundings.