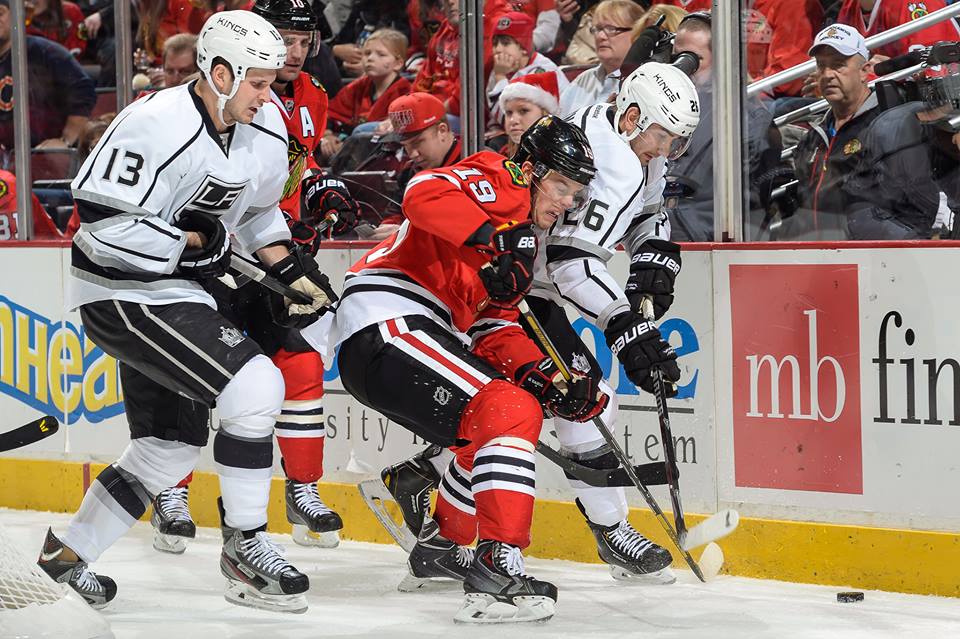 CHICAGO— Chicago’s grip on success was too much for Los Angeles to keep pace with. A lone goal from Brandon Saad in the first period was enough to shut down the Kings efforts to beat the top seed in the Western Conference at the United Center Monday night.

The first period saw both teams playing even hockey; with Chicago having home advantage led to little change of control. The lone goal came in the seventh minute of the first with Saad scoring his 14th on a fight for the puck in the neutral zone. The goal began as a 2 on 1 with Bryan Bickell sending the pass to Saad beating Kings goaltender Martin Jones in his first start since breaking his eight-game winning streak last week. Chicago gave Los Angelesa chance to tie the game in the final minutes of the period, but the Chicago PK unit which is ranked second in the league at 88.1 percent, left little chance for the Kings to force a tie.

The Kings gave Chicago a huge chance to increase their marginal victory with a 5 on 3 power play three and a half minutes into the second, but the Kings penalty killing was able to withstand Chicago’s offense. The Blackhawks saw only 11 shots to LA’s 15, but even with a second chance on the man advantage, the Kings couldn’t find a way to the game just yet.

Chicago had enough of the Kings tenacity of stealing the two points from them and took control of the game outshooting LA 13-5. The Kings struggled to keep up making ugly passes that the Blackhawks countered for the remainder of the game. The loss led to Jones adding his second to the losing column. He made 29 saves in the process that still saw success in front of the net as he maintained a .955 save percentage through 10 games.Chicago’s goaltender was seeing his own dominance in the net grow as Antti Raanta improved to 10-1-3 recording his first shutout in his career.

With the New Year approaching, the Kings conclude the year on the road with a match against the Dallas Stars who sit below playoff contention in the Central Division. Chicago’s victory puts them two points ahead of Anaheim in conference and could be considered the best team of 2013.