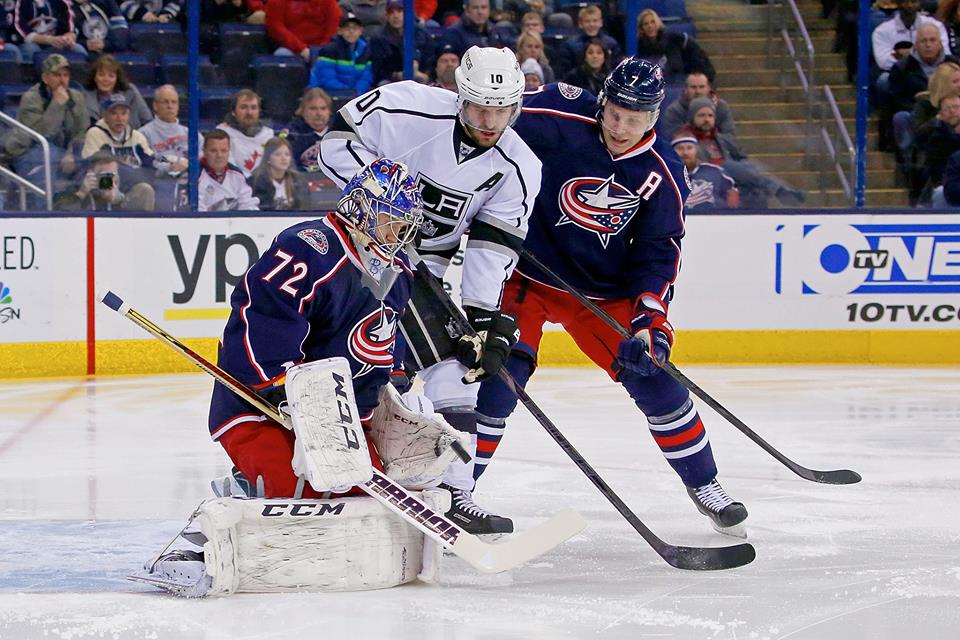 The Kings came into Ohio with a sure fact that a win before meeting Anaheimat home would do some good. Their luck was not present in Detroit, nor did it travel to Boston where they lost 3-2 in a Monday afternoon game. Los Angeles made the fact known that a third could not be tolerated. Dwight King emphasized that statement by scoring 2 minutes into the first period on a rebound from Trevor Lewis that went off the post near goaltender Sergei Bobrovsky to give the Kings the open net on the stick side and notch his 11th.Los Angeles played a huge part of the first period making blocked shots in support of Martin Jones who was in the net for the team. Given Jones’s early success this season, LA thought that having him in net would act as insurance.

Unfortunately, the policy expired at 12:47 on the Blue Jackets’ power play where Umberger scored his twelfth of the season by tipping in the puck from James Wisniewski’s shot that caught the crease, giving Umberger the time needed to tie the game. Center Ryan Johansen scored his 19th by skating ahead of three Los Angeles players after receiving a pass from Ryan Murray, deking Jones out in the process. Columbus made a big comeback on shots to the net in the second half of the period, outshooting LA 12-11.

The second period played much like the first with the Kings opening their offense to regain ground loss in the first. The team relied on Jeff Carter who scored a backhander on Bobrovsky, giving him his 20th goal and second time this season to reach that amount with LA. With the game tied and Columbusspending most of the period to break away, a point of advantage fell on their sticks as the Kings’ vulnerability showed in the final minutes for an attack on offense.

Umberger got the ball rolling once more for Columbus, scoring his second of the night on an unassisted shot from a far off angle to give his team the lead again. Nathan Horton added his third with 16 seconds left to hold a two-goal margin to close out the second. The Blue Jackets shot a dozen more in the Kings’ end, indicating that their six-game streak would not be put out by a struggling team from Southern California.

Los Angeles and Columbus began the third looking even on the ice, but the score made the big difference. Time played the ultimate factor on whether the Kings could keep up while attempting to tie the game with their opponent. The answer turned into Columbus scoring a third unanswered with Artem Anisimov grabbing his 13th on a steal in the Kings’ zone, with Anisimov walking the puck to the net to go up 5-2.

Scoring three goals against a team who once sat at the bottom of the Metropolitan Division now vying for a playoff spot figured to be impossible. The feat would not be lost as Robyn Regehr in just his second season playing for the Kings scored his first of the year with the help of first line mates Justin Williams and Mike Richards cutting the lead down to a pair. Columbuswould hold that lead with the relentless hits, blocks and above-average faceoff wins that gave them a strong control of the puck.

Jones accepted his fourth consecutive loss this season stopping 29 of 34 shots from Columbus, dropping him to a .940 save percentage. Last season’s Vezina trophy winner fared better, recording his 16th victory and eighth straight by making 26 saves on Los Angeles with a .915 save percentage. It won’t be the last time Los Angeles faces the relentless Blue Jackets, but all eyes now look forward to Thursday in a final road trip to Anaheim to face a resurging Ducks team prior to their matchup outdoors on Saturday.