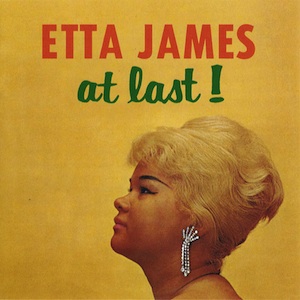 Multiple reports indicate James, best known for her hit song, “At Last” which was enshrined in the Grammy Hall of Fame, was in declining health for many years.  She was reported to be suffering from dementia and kidney failure.

James also struggled with her weight throughout her life as she weighed more than 400 pounds at one point.  In 2002, upon recommendation from “Roseanne” star Roseanne Barr, James underwent a gastric bypass procedure and lost 200 pounds.  Drug problems also plagued James as it did throughout her life when she reportedly spent time at a detox facility in 2010 for an addiction to painkillers and over-the-counter medications.

According to Biography.com, James was born Jamesetta Hawkins on January 25, 1938 in South Los Angeles to a 14-year-old single mother and her musical talents became apparent quickly as she was a gospel prodigy singing in her church choir and on the radio at age 5.  By age 12, James was in San Francisco working for bandleader Johnny Otis.

The longtime L.A. resident’s career soon took off after her 1955 single “The Wallflower” (better known as “Roll With Me Henry”) shot to the top of the R&B charts.  It was during this time that she became known as Etta James, a shortened version of her birth name.  After being signed to Chicago’s Chess Records in 1960, James’ singles “All I Could Do Was Cry,” “Trust In Me,” and her iconic ballad, “At Last” soared to the top of the charts.

James battled an addiction to heroin during this time but continued to record new music and received a Grammy nomination for her 1973 album, Etta James.  She didn’t win a Grammy until 1994 for her jazz standards album Mystery Lady which was a tribute to jazz singer Billie Holiday.  James also won for Best Contemporary Blues album for her work on Let’s Roll in 2003 and Best Traditional Blues Album in 2004 for Blues to the Bone.

The last studio album from the 1993 Rock & Roll Hall of Fame inductee came in November 2011 and was titled “The Dreamer.” James’ versatile voice has influenced subsequent generations of singers such as Tina Turner, Bonnie Raitt and Christina Aguilera.

James is survived by Artis Mills, her husband of 42 years, her two sons Donto and Sametto James and several grandchildren.

A public viewing for the singer was held on Friday, January 27 in Inglewood and the funeral took place on Saturday, January 28 in Gardena.